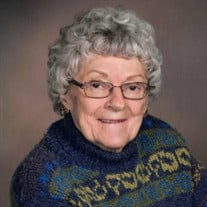 Lorna's Funeral Service can be viewed here: https://vimeo.com/674562625 Lorna Grace Arenson, 86, Fargo, North Dakota, died Thursday, February 3, 2022 at her daughter's home under the care of Hospice of the Red River Valley with her daughters present. Funeral service will be Tuesday, February 8, 2022 at 11:00am, with a visitation one hour prior at Immanuel Lutheran Church, 1258 Broadway in Fargo ND. Internment will be in Vergas, Minnesota. Lorna Grace Beck was born October 2, 1935 to Rev. Martin and Roma (Ketcher) Beck in Dora Township, Minnesota. She moved with her family to Evergreen, MN before moving to Hoffman, MN where she graduated from high school. She was united in marriage to Gerald "Jerry" Arenson on July 25, 1954 at Zion Lutheran Church in Hoffman Minnesota. Lorna and Jerry lived in several locations while he was serving in the USAF. Upon Jerry's discharge, they lived in St. Paul MN before moving to Frazee MN in 1964 to own and operate Star Drug, Hardware & Variety Store many years. They raised two daughters, Kathi and Diane. Lorna was a member of Bethlehem Lutheran Church in Frazee and later Immanuel Lutheran Church in Fargo. Lorna's legacy was faith in Jesus Christ which she saw carried out from her grandparents through to her great grandchildren. Her quiet faith touched and enriched many lives. Survivors include daughters: Kathi (Larry) Mayer of Fargo, ND; Diane (Paul) Overby of Wolford, ND; three grandchildren: David (Lindsay) Mayer; John (Ilse) Mayer; and Anne (Ben) Ross; four great-grandchildren: Lilliana, Isabella and Luke Mayer and Louis Ross; brother Arnold Beck of North Canton, OH and several nieces and nephews. She was preceded in death by her parents, husband, Jerry, three brothers: Franklin, Alfred and an infant brother; sister Eleanora "Becky" Woodard and an infant sister; sisters in-law Esther Beck and Dixie Beck and brother-in-law Bob Woodard. Memorials may be given to Gideons International.

The family of Lorna Grace Arenson created this Life Tributes page to make it easy to share your memories.

Send flowers to the Arenson family.