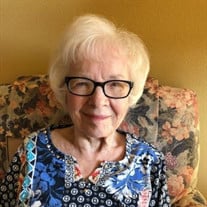 Loria Jean Kelly, born March 30, 1928, to Alice (née Maddock) and Ernest Collette, Sr., in Grand Forks, ND passed very peacefully from this world on Monday, December 13, 2021. “There really is no way to explain the name “Loria,” she said. “My mother liked it, so, just get rid of the ‘G.’” Loria graduated from St. James High School in Grand Forks. She loved to dance and, if that wasn’t dizzying enough, she was the St. James undisputed cartwheel champion of 1945. After high school, she attended St. Catherine’s University in St. Paul, MN and the University of North Dakota, studying history. During her UND days, she met a handsome, decorated GI, Duane Kelly and they married in June 1951 and settled in East Grand Forks, MN. Loria loved being a mom. She and Duane had seven children who adored her, except when she threatened the wooden spoon treatment, which never surpassed the threat stage. She got some exercise chasing after kids with that wooden spoon. The chaos usually ended with her exhausted and laughing because she knew she could not catch the wee culprit(s.) Loria was an exceptional cook. While the aroma of her holiday meals filled the house with great anticipation, her lasagna and dinner rolls were her specialty. Loria made each St. Patrick’s Day memorable by adding green food coloring to orange juice and scrambled eggs. While rather disgusting in appearance, it was consumed with gusto. Loria and Duane, with all seven kids, took many family vacations with dear friends, Rodell and Gloria Endres and their six children. The first trip was to Montreal in 1967 for the World’s Fair Expo. In 1968 this group of 17 visited the west coast. The trip across the desert was driven at night to avoid the heat, so as not to bake their kids in the tin cans that were the Dodge motorhome (Kellys) and the Airstream (Endres.) In 1969, the east coast was the destination, mainly Washington, D.C. and New York City as well as Niagra Falls. Nothing says “Fun!” like a family of nine being stopped in rush hour traffic in mid- Manhattan. Many camping trips were made to Cass Lake at Norway Beach, “To get away from it all.” After her kids became teenagers, Loria joined her father at Collette Realty as a real estate agent. She developed many life-long friendships from her new work experience. While there were few women in real estate at the time, Collette Realty employed only women. Loria was a member of Sacred Heart Church in East Grand Forks, MN. It is there that she found comfort and community with fellow parishioners. Her angelic voice was among those who sang in the church and the funeral choirs. During the flood of 1997 residents were instructed to evacuate. Loria packed up Peter and herself while drawing on her ever present inner strength and arrived in Crookston to await the resolution. Perhaps it was her insight of real estate management or her age (“I am done running up and down stairs!”) that prompted her to build her one-story home in 1996 in EGF, minus a basement. When it came to civics, Loria, very early, provided instruction and insight into the responsibility of the voting process. She had several children in tow at any given precinct location while she cast her ballot. She very well may be discussing today’s hot topics with those who preceded her, as it is always the right time to set the world straight. Loria is survived by her children, Jean Miller, Pahoa, HI, Jay (Linda) Kelly, Sioux Falls, SD, Tom (Marilyn) Kelly, St. Louis, MO, Anne (Jeff) Zarling, West Fargo, ND, Mary (Dave) Johnson, Fargo, ND, Jim Kelly, Edina, MN and Peter Kelly, Fargo, ND. Her many grandchildren who survive her are, Jason (Liberty) Kelly, Matt (Beth) Kelly, Nick (Dani Black) Kelly, Dori Baliva, Sean (Bridget) Hoffert, Maggie Zarling, Alex Zarling, Heath Johnson, Derek (Rachael) Johnson, Nolan Kelly and Olivia Kelly, 15 great grandchildren and one great-great granddaughter. She is also survived by her brothers Ernie Collette, Jr. and John (Ann) Collette, sisters-in-law and good friends, Myra Collette, Grand Forks, and Mary Noah, Fargo, and many nieces and nephews. Loria was preceded in death by her parents, her sisters Ellen Rose LaSeur, Pat Meagher and Marjorie Fromm, her brothers Terry Collette and Denzil Collette, son-in-law Nash Miller and grandson Nash Miller, Jr. A service will be held at a later date.

The family of Loria Jean Kelly created this Life Tributes page to make it easy to share your memories.

Send flowers to the Kelly family.