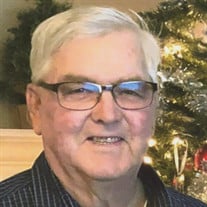 Loren Robert Owens,74, passed away March 3, 2021. He was born March 1, 1947 to Earl and Irene Owens. A memorial service will be held on Thursday, March 11, 2021 at 2:00 P.M. at Concordia Lutheran Church, Crosby, ND. Burial will be at the Veterans Memorial Cemetery in Mandan. Loren joined the Army in November 1966 and proudly served his country in Vietnam. He was discharged November 1968. He married Jane Nypen on July 6, 1974. They had three sons. He loved his children and grandchildren. Loren had the perfect job delivering propane. It gave him the chance to visit with his customers. He retired in 2016. Loren's greatest joys were camping, fishing, and hunting with his family. In his later years he enjoyed reading, woodworking, and collecting fishing gear and tools--lots of tools! He spent hours driving the roads of Divide County in his red Ford. Loren is survived by his wife, Jane, sons, Brent (Shelley), Jeremy (Jana Enger), and Christopher (Jessica) along with his mother-in-law, Ruby Nypen. grandchildren, Dylan Owens, Camden Owens, Dylan Enger, Caitlyn Enger, Carson Enger, Easton Owens, and Londyn Owens, brothers, Carl (Cora) and Ken (Laurie), sisters, Brenda (Ed) and Marcia, sister-in-law Martha, brothers-in-law, Jerry (Sandy), James (Tess), Corey (Melinda) and numerous nieces and nephews. He was preceded in death by his parents, brother Ron, father-in-law LeRoy Nypen and sister-in-law Garilyn. In lieu of flowers, memorials can be given to St. Luke's Medical Center, Crosby, ND. Memories and condolences may be shared at www.hansonrunsvold.com. Arrangements by Hanson-Runsvold Funeral Home - Fargo, ND.

The family of Loren Robert Owens created this Life Tributes page to make it easy to share your memories.

Send flowers to the Owens family.