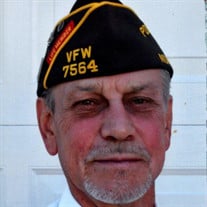 Lon Johnston's Memorial Service can be viewed here: https://vimeo.com/686060035 View Lon Johnston's Tribute Video Here: https://www.tributeslides.com/tributes/show/QHTLLTT3CQ9ZY3SQ Lon D. Johnston, age 73, of Felton, MN, passed away Saturday, February 19, 2022, at his home. Lon was born September 3, 1948, in Fargo, North Dakota, where he was adopted by William and Viola (DeMars) Johnston of Grafton, ND. Lon grew up in Grafton, where he attended school. He then joined the Navy in 1965, serving in the Vietnam war from 1965 to 1972. While aboard the USS Austin LPD-4, they recovered the space shuttle Apollo 4. Following his years in the military, Lon worked as a finish carpenter at the State School in Grafton, a kit car salesman at Classic Roadsters in Fargo, and as a District Sales representative for Dayco Rubber Corporation in Harrisburg, Pennsylvania. Lon finally retired in 1998; during this time, he enjoyed rock hunting, riding his motorcycle, gardening, and working outside in his yard, but most of all, he enjoyed the time he spent with his German Shepherd, Max. Lon was a member of the VFW Color Guard, president of Eagles #2803 from 1979-1983 in Grafton; he was also a member of the Valley Skydivers Club in West Fargo. Lon is survived by his children Don, Greg, Kristi (Dane) Lorinser, Paige, Vanessa (Anthony) Noce, Christin (Dave) Munchoff, and Skyler Nelson. His grandchildren, Mikalah, Madison, Caitlyn, Casey, Paytyn, Cheyanne, Brook, Kyler, Tasha, Macy, and Demi. Along with his great-grandchildren Ivy, Eden, Noah, Jordan, Mia, Adrian, and Hadley. Lon was preceded in death by his parents and granddaughter Jordan Johnston.

The family of Lon Duane Johnston created this Life Tributes page to make it easy to share your memories.

Send flowers to the Johnston family.