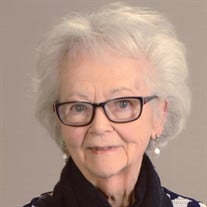 Lila's Funeral Service can be viewed here: https://vimeo.com/440366928 Lila Moxness Erickson Dahl died on July 17, 2020, at Sheyenne Crossing in West Fargo. Lila was born on a farm southeast of Milnor, North Dakota, on May 27, 1928, to John and Erna (nee Larsen) Moxness. Lila's schooling began in a country school, Hall No 2. In 1939 her parents moved the family to Milnor, where her father continued to farm and later also owned and operated the Moxness Mobil Service Station with his son, Erwin. Lila graduated from Milnor High School and worked at the Milnor Theater. Lila married LeRoy Erickson on November 10, 1946. They operated a farm near DeLamere and she spent her years as LeRoy's helpmate, through farming, raising a family, community service, and church work. Lila also enjoyed serving offices on a district level for the American Lutheran Church and a delegate to state and national level for the District 26 and North Dakota Republicans while helping LeRoy campaign for public service to the community and State of North Dakota in the North Dakota Legislature. Lila also appreciated being one of the first four women in the American Lutheran Church Eastern North Dakota Synod to be elected and to serve as a delegate to the national church convention in Detroit, Michigan, in 1972. Following the Legislative years, they built a second home for themselves in Mesa, Arizona, where they spent their winters but continued to farm until their retirement in 1988. It was in Mesa, Arizona, that with free time on her hands, Lila felt guilty for not being as busy, and was quickly hired to sell women's fashions at Ann's Fashions. Lila also worked at Sunland Village Golf, Inc., where she enjoyed being an assistant buyer of women's clothing. Lila and LeRoy enjoyed their many friends in Arizona, where it was easy to golf, go dancing to many good dance bands, play cards and entertain friends. Coming back each spring to their farm home near Milnor, North Dakota, they also found enjoyment after retirement in owning a motorhome and using it to travel with friends, in caravans of six or more motorhomes to see many parts of our country in the summertime, as well as time with their families at Marsha and David's summer home on Star Lake, MN. Lila and LeRoy were married for 50 years, living on their farm SE of Milnor. The summer after LeRoy died in January 1997, Lila moved to a new condo in Fargo and continued to spend five to six months a year in her Mesa home and working part-time at Sunland Village Golf Course. Lila married Eugene Dahl August 9, 1999, and they continued to enjoy their families and their homes in Fargo, Mesa, and Pelican Lake in Minnesota. Eugene died in 2008. In 2009 Lila moved to Waterford and later to One Oak Place in Fargo and Sheyenne Crossings in West Fargo. Survivors include her daughters, Marsha (David) Susag and Kim (Jon) Mund all of Fargo, ND; four grandchildren, Patrick Mund, Bayfield, CO; Kristin Mund, Oklahoma City, OK; Erik Susag, Fargo, ND; Mark (Bridget Carlson) Susag, Fargo, ND. She also leaves five great-grandchildren: Novak, Cannon, and Flint Mund, Bayfield, CO; Ava and Gabriella Susag, Fargo, ND. Three siblings survive Lila: Joyce Weiman, Cape Coral, FL, Betty Schoephoerster, Fargo, ND, and Loren (Karen) Moxness, Fergus Falls, MN. She leaves many nieces and nephews. Preceding Lila in death were her parents, John and Erna Moxness, her husbands, LeRoy Erickson and Eugene Dahl, a sister, Marian Thompson, and a brother, Erwin Moxness. In lieu of flowers, the family asks that memorials be made to: Hospice of the Red River Valley, 1701 38th St S, Fargo, ND 58103 or Fix It Forward Ministry, Inc. 2620 2nd Ave N, Moorhead, MN 56560. A funeral service will be held Wednesday, July 22, at 11:00 AM at Messiah Lutheran Church in Fargo, North Dakota, with visitation one hour prior. Masks are recommended for the service and seating will be limited due to Covid-19. Burial will be at the Immanuel Lutheran Cemetery, Wednesday at 2:00 PM in Milnor, North Dakota.

Lila's Funeral Service can be viewed here: https://vimeo.com/440366928 Lila Moxness Erickson Dahl died on July 17, 2020, at Sheyenne Crossing in West Fargo. Lila was born on a farm southeast of Milnor, North Dakota, on May 27, 1928, to John... View Obituary & Service Information

The family of Lila Mildred Dahl created this Life Tributes page to make it easy to share your memories.

Send flowers to the Dahl family.