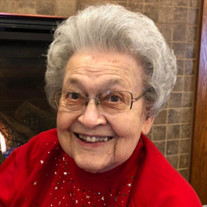 Leona E Hammes, age 91 and two days, left this earth and 'went over the mountain' to join her beloved husband Jim on Tuesday, March 31, 2020, at Bethany Retirement Living in south Fargo. Leona was born Leona Weber on March 29, 1929, to Joseph and Johanna Weber of Schefield, North Dakota. The eldest of eight children on the farm, she attended boarding school at St. Mary's in New England, ND. Leona loved the nuns at boarding school, finishing high school in just three years. She especially enjoyed washing dishes, where she could have one-on-one conversations with the nuns. She went on to nurses training at St. Alexus Hospital in Bismarck, where she became a Registered Nurse. Leona was joined together in the sacrament of marriage to James A. Hammes of New England, North Dakota, on June 20, 1959. They made their home in Bismarck, where Jim was in the Dairy Queen and restaurant business. Leona retired from her nursing career, and together they had four children. They raised their children there, and lived in Bismarck until 2003, when they relocated to Fargo to be nearer to their family. Jim preceded Leona in death on March 13, 2005, and Leona moved into assisted living at Bethany Retirement home in 2011. She resided in Assisted Living for eight years and moved over to Skilled Care in early 2019. She passed almost exactly a year later. Leona was a wonderful mother and wife. She was a devoted Catholic who was active in the Corpus Christi parish in Bismarck, and was a member of Catholic Daughters, Discussion Club, and various groups associated with the parish. Leona loved to garden, play cards and Aggravation, cook, and just visit. Banana bread and Party Mix were among her 'specialties'. She made the best chokecherry jelly in the world, and later in life Jim began to make cordial with her chokecherry syrup. She once had her picture taken with Myron Florence of the Lawrence Welk orchestra - starstruck! Leona and Jim travelled, often attending Dairy Queen conventions, and later just for fun. Leona made zillions of gallons of her famous potato salad that Jim catered through his business, feeding funeral goers, wedding crashers, graduation fly-byers, and others in the Bismarck/Mandan area. Leona was an avid sports fan. She and Jim spent literally thousands of hours watching the Twins, Vikings, and Lakers on television together. She also enjoyed attending Redhawks games in Fargo with her children and grandchildren. More than anything, Leona enjoyed being with family - especially her grandchildren- playing games, watching TV, crafting, cooking, and eating in the diner at Bethany. She was a feeder, that one. Upon moving into Bethany on 42nd in 2011, Leona enjoyed crocheting, coloring with markers, watching game shows, attending mass, and playing card games and dominoes with her many new friends. She frequently dined at the 42nd Street Diner and enjoyed chatting with her family and eating her signature salads with crispy bacon on top. She loved to sit in front of the fireplace in the front room, where she could warm up and socialize with friends and retirement home staff. Leona was preceded by her husband, James; parents Joseph and Johanna; brother Edward; sisters Alice, Bernice, and Antonia; and many dearly missed friends. Leona is survived by her children, David (Connie), Lake Park, MN; Patricia (John) Lindquist, West Fargo, ND; Shawn, Bismarck, ND; and Greg (Stephanie), Fargo, ND; her grandchildren Abby, Ellie, Megan, Tommy, Addison, Olivia, and Jackson; siblings Berna, Beanie, and Urbie; sister-in-law, Darlene; many nieces and nephews; and friends both near and far. Sweet dreams, Mom. You are always in our hearts. Interment will be at the North Dakota Veterans Cemetery south of Mandan, ND.

The family of Leona Eva Hammes created this Life Tributes page to make it easy to share your memories.

Send flowers to the Hammes family.