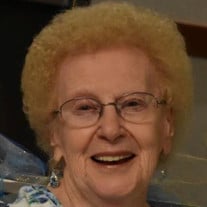 Lenora's service can be viewed here at 3pm, Wed. December 23 and will be available after as well: https://vimeo.com/493873992 Lenora E. Kopp, 97, of Fargo ND died peacefully in her home on December 22, 2020 surrounded by her family. Lenora Evelyn Erdmann was born June 21, 1923 to Paul and Emma Erdmann in Davenport, ND. She was baptized and confirmed in the Canaan Moravian Church in Davenport. Lenora had one brother, Marvin. She attended a one-room schoolhouse where part of the curriculum in winter was to bring in wood for the stove to keep them warm! She attended school through 8th grade and then stayed home to help out on the farm. She married Leonard Kopp in October 1952. After farming for several years, they moved to Amenia, ND and then to Fargo. Leonard passed away in June 1972. Left to raise her 5 children, who were all still at home, on her own, Lenora ran a daycare in her home for 44 years and became “Grandma” to many of those children, who years later invited her to their graduation and wedding celebrations. Lenora was a lifelong member of Pontoppidan Lutheran Church, where she was an active member of Circle. Her favorite pastime by far was visiting; there wasn’t a stranger she didn’t know. She always had coffee on and homemade baked goods ready just in case someone stopped by. She was always proud of all of her children and their many accomplishments. Grateful for having had her as their mom are her children: Charlotte (Steve) Henry, Perham, MN; Steven Kopp, Fargo; James (Mary) Kopp, Draper, UT; Richard Kopp, Fargo; and Roger (Bette) Kopp, West Fargo. Her 17 grandchildren are: Jason (Josie) Zurn, Carrie (Jason) Rahn, Rachel (Russell) Howes, Nikki Myhra, Justin (Jessie) Kopp, Jeremy Kopp, Jeffrey (Rachel) Kopp, Terry Hushka, Peter (Deonna) Kopp, Michael Kopp, Cody Kopp, Channing Kopp, and Caitlyn Kopp. Lenora was also blessed with 17 great-grandchildren and 4 great-great-grandchildren. She is survived by one sister-in-law, Rose Klym, and two brothers-in-law, Baldwin Ternes and Matt Hersch, as well as her beloved dog Kobe and many friends. Lenora was preceded in death by her husband Leonard, her parents, her brother, 7 brothers-in-law, 9 sisters-in-law and 1 grandchild. Lenora’s funeral was held on December 23, 2020 in Fargo. A celebration of Lenora’s life is being planned for June 26 at her former home in Fargo, further information will be posted at a later date. In lieu of flowers, memorials are preferred to Hospice of the Red River Valley.

Lenora's service can be viewed here at 3pm, Wed. December 23 and will be available after as well: https://vimeo.com/493873992 Lenora E. Kopp, 97, of Fargo ND died peacefully in her home on December 22, 2020 surrounded by her family. Lenora... View Obituary & Service Information

The family of Lenora Evelyn Kopp created this Life Tributes page to make it easy to share your memories.

Send flowers to the Kopp family.