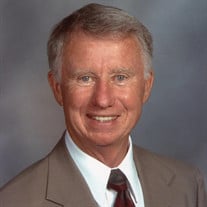 LeNoel William Lichtsinn was born on October 11, 1932 to William and Mable (Lundquist) Lichtsinn in Wheaton, MN. LeNoel (“Lix” or “Lee”) grew up and attended school in Wheaton, graduating from high school in 1950. He attended the Minnesota School of Business in Minneapolis and was employed by the McCabe Grain Exchange. He enlisted in the Army in 1953 and served at Fort Leonard Wood, being assigned to administrative duties and a leadership position in a program to train recruits with disadvantaged backgrounds. He was honorably discharged as a sergeant in February 1955. He returned to Wheaton and reunited with his high school sweetheart, Enid Zitzow. Enid and LeNoel married at Grace Lutheran Church in Breckenridge, MN on May 28, 1955. They moved back to Minneapolis where he resumed work at the Grain Exchange. In 1956, he accepted a position at a “start-up” company, Blue Cross Blue Shield of North Dakota, and they moved to Moorhead. LeNoel helped the ND Blues capture Medicare processing contracts from several states, employing hundreds of new employees in Fargo (eventually becoming Noridian). He loved his work family and made friends across the country during his work travels. In May 1996, he retired after 40 years as Sr. Vice President in charge of Claims Administration & Government Programs. LeNoel will be remembered for his strong work ethic. He loved building projects at the lake and at home. While working at BCBS, he attained a degree in business and computer science from MSUM in 1974. He was a true gentleman, a prime example of the greatest generation. Actively involved in the Sertoma service club, LeNoel held many leadership roles. After retirement, he helped organize the Verde Groves Homeowner’s association. He was eager to help out wherever he was planted. A favorite pastime was enjoying his family at their home on Ottertail Lake. He and Enid also entertained their dear friends, the “Rowdy Bunch” at their annual lake camp out- enjoying food, fellowship and dance. This loyal group of friends remained a constant throughout their adult life. He will be remembered for his kind, silly sense of humor. LeNoel and Enid loved to travel, exploring much of the United States and the world. They were inseparable and were graceful dance partners throughout their long marriage. In 1996 LeNoel and Enid purchased a winter home in Mesa, AZ. They became “snowbirds” and developed another network of friends. They moved to Arizona in 2009, saving their Midwest visits for the warm summer months. In 2016 they moved back to Fargo. His Christian faith sustained him throughout his life. LeNoel was baptized in 1933 and confirmed in 1946 in Wheaton. He was active at Our Redeemer Lutheran Church in Moorhead since 1956, taking many leadership roles. He was also an associate member of Christ Greenfield in Arizona. His faith was a quiet, steady influence throughout his life. LeNoel was preceded in death by his parents, William and Mable Lichtsinn; and sister, Elaine Iverson. He is survived by his wife of 66 years, Enid Lichtsinn; children, James (Mary) Lichtsinn of Moorhead, MN and Jodie (Bruce) Morgan of Fargo, ND. Two grandchildren also survive him, John (Hannah) Lichtsinn of Mendota Heights, MN and Andrea Lichtsinn of West St. Paul, MN and 2 great-grandchildren, Linnea and Kai Lichtsinn; and sister, Jean Brazelton of Vacaville, CA. LeNoel died peacefully at home at the age of 89 on November 9, 2021. His family is deeply grateful to the staff of Ethos Hospice, Eventide Senior Living and Griswold Home Care for their dedicated, compassionate care of LeNoel and the respect given to the entire family. The family will hold a private burial service. A celebration of LeNoel’s life will take place in the spring of 2022. Memorials may be designated to Our Redeemer Lutheran Church and Ethos Hospice.

The family of LeNoel "Lee" William Lichtsinn created this Life Tributes page to make it easy to share your memories.

LeNoel William Lichtsinn was born on October 11, 1932 to William...

Send flowers to the Lichtsinn family.