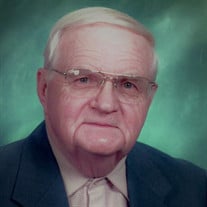 It is with great sadness that we announce the passing of Lawrence E. Rosberg at Sanford Hospital on Sunday, February 9th. He was born on August 15th, 1925, in Minneapolis MN where he grew up, to Harold and Edith (Roust) Rosberg. He often told stories about helping on the family truck farm in Edina. He went into the army after graduating from Southwest High School and was a medic in an artillery unit. During the war he served in the E.T.O., principally Germany. After the war, he attended and graduated from the University of Minnesota with a degree in Agronomy. He then spent time as an agricultural instructor in Fertile, MN and stayed with a family who introduced him to a lovely young lady named Noreen, who would eventually become his wife. Noreen and Larry had 3 children in Bloomington, MN and moved to Fargo, ND in 1969 where he worked at Warner and Co. for 18 years before retiring in 1987. He often mentioned that retirement was the best job he ever had. Larry was an avid traveler, woodworker and nature lover. He enjoyed vacationing in northern Minnesota and taking trips around the country with Noreen. His friendly personality endeared him to his neighbors, friends and anyone he met. He was preceded in death by his parents and his beloved wife of 62 years, Noreen. He will be dearly missed by his sons, David Rosberg, Mark (Marilyn) Rosberg and his daughter, Lynn (Philip) Schaan, along with his grandchildren, Sarah (Matt) Reski and Michael (Kristine) Schaan. He will be remembered by his great-grandchildren, Vivian Reski and a daughter soon to be born to Mike and Kristine Schaan. He is also survived by his sister Alice (Louis) Kittleson and numerous nieces and nephews. A prayer service will he held on Sunday, February 16th 2020 at 2pm at Hanson-Runsvold Funeral Home. He will be interned at Fort Snelling with a ceremony in Minneapolis, MN. The date and time are to be announced. In lieu of flowers, the family asks that you make a charitable donation to any organization that supports conservation ideals for the preservation of the quality of life for future generations. This was an issue dear to his heart. Condolences and memories may be shared at www.hansonrunsvold.com Arrangements by Hanson-Runsvold Funeral Home – Fargo, ND

It is with great sadness that we announce the passing of Lawrence E. Rosberg at Sanford Hospital on Sunday, February 9th. He was born on August 15th, 1925, in Minneapolis MN where he grew up, to Harold and Edith (Roust) Rosberg. He often told... View Obituary & Service Information

The family of Lawrence "Larry" Edward Rosberg created this Life Tributes page to make it easy to share your memories.

It is with great sadness that we announce the passing of Lawrence...

Send flowers to the Rosberg family.