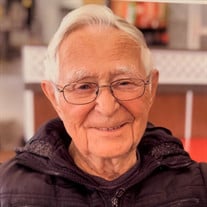 View Lawrence Heyd's Funeral Service Livestream Here: https://vimeo.com/662322700 Lawrence (Larry) LeRoy Heyd, age 91, died December 30th, 2021 at his independent living home at Eventide Sheyenne Crossings in West Fargo, surrounded by his family. Lawrence was born March 1, 1930 to Jacob and Otillia (Maas) Heyd. His education was interrupted due to moves to Long Lake, SD; Chiloquin, Oregon; Hazen, ND; and Jamestown, ND. His tenacity and hard work made up for his lack of formal education. Lawrence married Bernice Maas of Hazen, ND 69 years ago. Three children were born to this union. The family lived in Jamestown, ND until 1958, when they moved to Fargo, ND, their permanent home. At that time, Lawrence and his father, Jacob, formed Heyd and Son Concrete Construction. They worked together until his father’s retirement. In 1967 Lawrence partnered with LeRoy Bernstein and they formed Valley House Movers, moving houses, heavy equipment, and one Viking ship. Many clients became lifetime friends and the work was fulfilling. The successful partnership continued for 20 years until Lawrence’s doctor recommended early retirement at which time he sold his partnership to LeRoy’s sons. For a short, stocky, impatient, tough, reliable, workaholic, Type-A personality, whom his wife dubbed “the stubborn German,” this was a tough pill to swallow. As time went on, he was cleared to take on some work and went back to work at Valley House Movers as a part-time estimator which he enjoyed for many years. Lawrence wasn’t “all work and no play” although he would prefer being in the middle of a project more than anything. It didn’t have to be his project – it could be anyone’s and he would dive right in to help or offer a tool or guidance. If anyone needed help, he would be there. He enjoyed spending time with the grandchildren and great-grandchildren who can attest to the number of delicious pancakes he made them over the years, or the number of rides given on the lawn tractor. Through the years he enjoyed snowmobiling; summers on West McDonald Lake, either fishing or taking kids water skiing for hours; traveling; taking great care of his cars, collecting cars, and going to car shows with Bernice (where her car won more often than his). Lawrence was proud to have served as president of the Fargo Eagles Club in 1993-1994 and enjoyed learning the ins and outs of the organization while meeting lots of new people along the way. Lawrence helped out at his son’s jewelry store for many years and got to know many regular customers. He became enchanted by cats after getting to know family members’ pets and his life was enriched by two special cat pals; Mitzi and Lexi. Later in life, gardening became important to him and he loved to plant tomatoes along with a few other vegetables and nurse them throughout the season – 2021 was his last planting season. Summer nights spent visiting with long-time neighbors were always special – he loved his home. He also loved the Olive Garden Italian Restaurant and that became the go-to place for an evening meal or to celebrate a special event. Regular workouts at the YMCA were important to him and his health and he continued that routine until about a year ago - lifting weights and spending time on the treadmill. He missed his friends there greatly when it became time to quit and look after Bernice. Lawrence is survived by his wife, Bernice; three children - Gary (Nancy) Heyd, Debra (Larry) Moug; and Nancy (Jack) Lunde, all of whom remain in the surrounding area; grandchildren - Katie (Drew) Bartelson and Dena (Steve) Nilsen; great-grandchildren - Taylor (Grant) Mjelstad, Emma Bartelson, Audrey Nilsen, and Ezra Nilsen; step-grandchildren - Jessica (Grant) Lindemann and Justin (Tricia) Braaten; step-great-grandchildren - Cruz Lindemann, Este Lindemann, and Bo Braaten; and one very special great-great-granddaughter, Ellen Mjelstad, a wee one who ignited pure joy in her grandpa in his final days. Lawrence is also survived by his sister, Marva Lou Miska; and several nieces and nephews. Lawrence was preceded in death by his parents and stepmother, Lydia Schuldheisz Heyd; infant brother, Milbert; step-great-grandchild, Devon Blackwelder; brothers- and sisters-in-law and special aunts, uncles, and cousins. Living a long full life also meant that he lost so many wonderful friends along the way and lamented about this often. Funeral: Wednesday, January 5th, 2022 at 2 PM at Hanson Runsvold Funeral Home, 215 7th St S, Fargo, ND with visitation one hour prior to the funeral service. Burial will be at Sunset Memorial Gardens. A special thank you to the staff at Eventide Sheyenne Crossings, and Ethos Home Care and Hospice for their caring, comfort, and grace during Lawrence’s short time living there. The family extends an extra special thank you to earth’s angels, Jane and Hope, who helped guide him to his final rest. The family suggests memorials to Olivet Lutheran Church, 1330 S University Dr, Fargo, ND 58103 or the American Heart Association. We encourage you to share your thoughts and memories at www.hansonrunsvold.com. A livestream of the service will be available. Thank you for being part of Lawrence’s life.

The family of Lawrence LeRoy Heyd created this Life Tributes page to make it easy to share your memories.

Send flowers to the Heyd family.