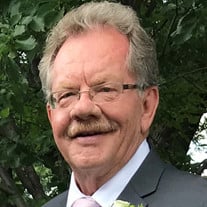 Lawrence (Larry) Joseph Bernhardt, 72 of Fargo, ND passed away surrounded by family on Sunday, February 2, 2020 at Sanford Medical Center in Fargo, after suffering a stroke on January 26. A visitation will be held at Hanson-Runsvold Funeral Home in Fargo on Thursday, February 6, 2020 from 5pm-7pm with a Prayer Service at 6pm. Funeral services will be held at 10:30am on Friday, February 7, 2020 with a visitation one hour prior at Sts. Anne & Joachim Catholic Church with Fr. Scott Karnick officiating. Burial will be at Veteran's Memorial Cemetery in Mandan, ND at noon on Monday, February, 10, 2020. Larry was born April 16, 1947 in Bismarck, ND to Joseph and Barbara (Storick) Bernhardt. He was raised and educated in Mandan, ND, attended catholic elementary school and in 1965 graduated from Mandan Senior High School. Larry served in the US Army from 1965-1968 where he was a Personnel Management Specialist at the Oakland, CA army base, and was responsible for managing one section of the discharge unit for returning Vietnam soldiers. Following an honorable discharge, Larry went on to work at the Capitol building in Bismarck, ND where he met Barbara Olson – they were married on June 6, 1970 in Hettinger, ND. Larry received an Associate of Arts degree from Bismarck Junior College in 1972 and a Bachelors of Science from Dickinson State University in 1974. As a licensed Social Worker, his professional career included Director of Stark County Social Services in Dickinson, ND, Assistant Executive Director of the Department of Economic Assistance at the ND Department of Human Services in Bismarck, Director of Koochiching County Community Services in International Falls, MN, and Director of Catholic Charities ND in Fargo until his retirement in 2013. Throughout his career, Larry gave much of his time in service to many organizations, typically in a leadership role guiding their missions in the service of others. Those organizations included: ND County Directors Association, National Eligibility Workers Association, ND Conference of Social Welfare, West River Conference of Social Welfare, Governor's Task Force to Determine a Solution to the Un-Insured and Under-Insured in ND, Court Improvement Project in ND, and a Task Force for Improving the Child Welfare System in ND. After his official retirement, he worked closely with Monsignor Goering as the Victim's Assistance Coordinator for the Diocese of Fargo and served as a board member for PATH ND. Larry did not just pass through this world, he truly made a difference and helped so many people to have better lives. Throughout his life and into retirement, Larry made time for the things he enjoyed – camping, playing games, traveling with his wife and friends, gardening and planting flowers, working part-time at Herberger’s, cherishing time with his family which included two grandchildren whom he adored, and fishing most recently on his very own boat. Larry is survived by his wife of 49 years, Barbara, his daughter Sarah (Ryan)Prom, grandson Connor Lawrence Prom and granddaughter Linden Prom of Sauk Rapids, MN; his son Aaron (Alyssa) Bernhardt of West Fargo, ND; sister Karen Bernhardt (Jim Tarlow) of Southborough MA; sister Pat (James) Holder of Glenwood, MN; sister-in-law Sandi (John) Frank of Elk River, MN; brother-in-law Ethan (Heidi) Olson of West Fargo ND; 5 nieces and their families, 3 nephews and their families and many special cousins, friends and neighbors. Larry was preceded in death by his parents, his sister Kathy and her husband Richard Zimmerman and his brother Edward Bernhardt.

Lawrence (Larry) Joseph Bernhardt, 72 of Fargo, ND passed away surrounded by family on Sunday, February 2, 2020 at Sanford Medical Center in Fargo, after suffering a stroke on January 26. A visitation will be held at Hanson-Runsvold Funeral... View Obituary & Service Information

The family of Lawrence Joseph Bernhardt created this Life Tributes page to make it easy to share your memories.

Send flowers to the Bernhardt family.