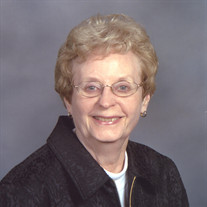 LaVonne Phyllis Oothoudt Brass, 85, of Fargo, ND, formerly of Marshall, MN died peacefully on August 22, 2019 in Fargo, ND. Funeral services will be held Sunday, September 8 at 1:30 PM at Christ United Presbyterian Church in Marshall, MN. Private burial will follow at Worthington Cemetery in Worthington, MN at a later date. LaVonne was born in Albert Lea, MN to Rolland “Rudy” and Helen (Haight) Oothoudt on January 17, 1934. She graduated from Minneapolis West High School in 1952. She received her Registered Nurse diploma from Minneapolis General Hospital School of Nursing in 1955. She worked as a nurse in multiple capacities including clinic and hospital nursing, working with severely disabled children, and as a surveyor and then supervisor for the Minnesota State Department of Health. She married Maynard Brass on June 13, 1955 in Minneapolis. LaVonne packed up and followed Maynard as he completed his Doctoral degree in Iowa, with subsequent moves to Shepherdstown, WV and Gettysburg, PA before they returned to Southwest State University in Marshall in 1967 to make that their home. She remained in Marshall following Maynard’s death in 1981 until 2014 when she moved to Fargo for health reasons. She was involved in the Christ United Presbyterian Church as an elder and deacon. She also sang with Sweet Adelines and enjoyed all sports, especially the Minnesota Twins and Vikings. In addition, she enjoyed traveling, attending auctions and gambling at local casinos. She was a homebody who most loved being home and spending time with her family. LaVonne is preceded in death by her husband Maynard, grandson Theodore, parents Rudy and Helen, in-laws Stena and Elmer Brass, Stena’s companion Ed Delano, brothers-in-law Cliff Pack and John Rollins, and nephew Tony Skorich. LaVonne is survived by children Doreen Brass (Doug Carrow) and Jim Brass (Lori Aaron-Brass); grandchildren Emily Carrow, Kaitlin Carrow, Gregg Brass (Karina) and Jazanne Brass; and great grandson Logan Carrow. She is survived by sisters Maxine Rollins and Darlene Skorich, sister-in-law Melba Faye Pack, and many nieces and nephews. In lieu of flowers, the family prefers memorials to any Ronald McDonald House, Hospice of the Red River Valley of Fargo, or Christ United Presbyterian Church of Marshall. The family of LaVonne wishes to extend their sincere thanks to the staff at Edgewood Vista in Fargo and Hospice of the Red River Valley for their kind and compassionate care and Pastor Anne Veldhuisen for help with the funeral service.

The family of LaVonne Phyllis Brass created this Life Tributes page to make it easy to share your memories.

Send flowers to the Brass family.