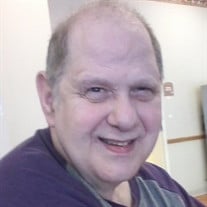 Klair's Tribute Video can be seen on the following link: https://www.tributeslides.com/tributes/show/2L54P3CF8WJHZWXL Klair Davar Haugen, 65, of Moorhead, entered into eternal peace June 20, 2020 at Sanford Hospital. He was born September 17, 1954 in Minneapolis to Orval and Frances Haugen. He attended Children’s Harbor School where he enjoyed bowling, swimming, dancing and Special Olympics. He spent many years at two Frasier Group Homes. A big thank you to all the staffers there that watched over and cared for him. After an extended stay in the hospital due to a broken back, Klair was transferred to Moorhead Rehab. He soon settled in and enjoyed his new home. He really liked playing cards and bingo. He collected magazines and would have a drawer full of them. He loved watching the traffic and trains go by on Hwy 10. Everyone smiled when Klair would wheel to open the front door for people. He always had the biggest smile! He became known as the “Door Man”. People were always nice to him and would give him treats or a pop. A special thank you to all the residents, staff employees, auxiliary and the ladies in the gift shop of Moorhead Rehab. They always treated Klair with dignity, respect and kindness. A special, special thank you to his cousin Linda (Backstrom). Who always remembered Klair with cards on his birthday and all the holidays. Klair is preceded in death by his parents, Orval and Frances, two brothers Lynal and Merle Haugen, a sister LoAnne Woods, two nephews Merdith Haugen, Merle (Doc) Haugen II, and many aunts, uncles and cousins. Klair is survived by two sisters Kathy Heinisch of Fargo and Michelle (Jeff) King of League City, Texas, sister-in-law Ardith (Sis) Vicklun, brother-in-law Tom Woods and 8 nephews and 2 nieces. The family wishes to extend their gratitude to the Moorhead Health and Rehab center for their care and support in his final days. A private service will be held. In lieu of flowers, memorial donations may be made to any charity of your choice. God bless and peace to you Klair.

The family of Klair Davar Haugen created this Life Tributes page to make it easy to share your memories.

Klair&#39;s Tribute Video can be seen on the following link:
https://www.tributeslides.com/tributes/show/2L54P3CF8WJHZWXL

Send flowers to the Haugen family.