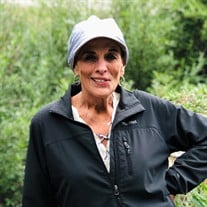 Kim's memorial service will be livestreamed here: https://boxcast.tv/view/kim-baarstads-funeral-obzod572hjrdnlhe5fxc Kim's memorial video can be viewed here: https://www.tributeslides.com/tributes/show/SFT4T8DX7SG274C6 Kimberlea "Kim" Jo Baarstad (Glenn), 63, of Fargo, North Dakota, passed away peacefully at home on August 17, 2021. Kim was born on November 30, 1957, at Mary Lanning Hospital in Hastings, Nebraska, to Joel and Peggy (Earnhart) Glenn. Shortly after, the family moved to Aurora, Colorado, and she resided there for the remainder of her childhood. Kim graduated from Aurora Central High School in 1975. She furthered her education at both Colorado State University and Denver Metropolitan College, and she completed her degrees in early childhood and elementary education. On July 18, 1992, she was united in marriage to Bruce Michael Baarstad at Perham Methodist Church (MN). Kim was employed by Cherry Creek Schools and Fargo Public Schools. For most of her career, she taught fifth grade and kindergarten at Washington Elementary School in Fargo from 1994 through her retirement in 2020. Kim had a passion for teaching, and she touched the lives of many students and staff throughout her thirty-six years as an educator. Kim cherished her time that she was able to spend with friends and family. She especially loved all the time spent as a family at their lake cabin on Devils Lake in Perham, Minnesota. Kim, along with Bruce, was dedicated to her marriage, career, family, and the success of the Denver Broncos. She did everything in her power to never miss either of her children's events, whether it was a choir concert or an athletic event. In addition to the love for her kids, she loved all her fur babies over time: Maggie, Mollie, Moose, and Murphy. Kim is survived by her son, Branton (Kallie), West Fargo; daughter, Kallin, Fargo; father, Joel Glenn, Aurora, CO; sister, AmyBeth (Bob) Stewart, Aurora, CO; niece, Savannah Stewart, Aurora, CO; nephew, Ryan Stewart, Aurora, CO; and mother-in-law, Eloise Baarstad, Fargo. She was preceded in death by her husband, Bruce, her mother, Peggy Glenn, and father-in-law, Milton Baarstad. A visitation will be held Friday, August 27, from 6:30-7:30pm, followed by a prayer service. The funeral service will be held Saturday, August 28, at 11:00am. All will take place at Hope Lutheran Church, North Campus.

The family of Kim Baarstad created this Life Tributes page to make it easy to share your memories.

Send flowers to the Baarstad family.