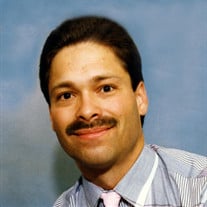 Kent A. Peterson, 58, suffered a sudden cardiac arrest and died in Houston, Texas on July 2, 2019. Kent was born in Fargo, ND on November 7, 1960. In his early years he lived with his parents, DeWayne and Arlene Peterson and sister, Sheri, in Devils Lake and Grand Forks, ND. In 1965 they moved to Bismarck, ND where he grew up and attended school. In high school he was a student manager for the Bismarck High School Demons basketball team and a member of the cross-country team. He had a high interest in law enforcement and was an active member of the Citizen Police Academy while in high school, achieving the rank of Sergeant. They wore full policemen uniforms while in training. He especially enjoyed ride-alongs with the patrolmen. While in high school, Kent’s compassion to help others emerged as a core value that accompanied him throughout his life. After graduating from high school, he worked at several jobs in Bismarck and Fargo. He moved to Denver, CO and worked in security roles. In May 1992 he graduated from Phoenix College in Arizona with a degree in legal assisting. While in college he was a volunteer in the Arizona Attorney General’s office in the victim witness assistance program and was awarded their Distinguished Service Award. He moved to California and worked for a law firm. When asked the size of the law firm he told his dad it was small as it only had forty lawyers. He never forgot his interest in law enforcement and when told he would need more college to do legal assisting within law enforcement, he decided to change careers. He had a high interest in flying and traveling so he pursued a career in aircraft mechanics. He graduated from Northrop-Rice Aviation and got his first job with an airline in Abilene, TX. His career took him to work for airlines in St. Louis, MO, Chicago, IL, Alexandria VA, Nashville, TN, Mobile, AL, San Diego, CA, and finally with American Airlines in Los Angeles, CA. He was injured on the job and recovery did not go well, resulting in both legs being amputated. A combination of the injury and Type 1 diabetes resulted in end stage renal disease. He was on kidney dialysis treatments for several years. Kent maintained his positive attitude through all the challenges his health presented. Kent is survived by his father, DeWayne Petersen, brother-in-law, Steve Bjorgan, and many uncles, aunts, and cousins. He was preceded in death by his mother, Arlene Nelson Peterson and sister, Sheri Peterson Bjorgan. In lieu of flowers, memorials are preferred to Olivet Lutheran Church, Hospice of the Red River Valley or a charity of the donor’s choice. Blessed be the memory of Kent Alan Peterson.

Kent A. Peterson, 58, suffered a sudden cardiac arrest and died in Houston, Texas on July 2, 2019. Kent was born in Fargo, ND on November 7, 1960. In his early years he lived with his parents, DeWayne and Arlene Peterson and sister, Sheri,... View Obituary & Service Information

The family of Kent Alan Peterson created this Life Tributes page to make it easy to share your memories.

Kent A. Peterson, 58, suffered a sudden cardiac arrest and died...