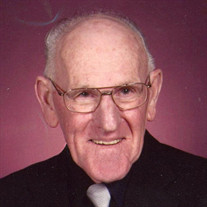 Kenneth's Funeral Service will be livestreamed here at 2:00 PM, Saturday, February 6, 2021: https://vimeo.com/509221411 Kenneth's Video Tribute can be viewed here: https://www.tributeslides.com/tributes/show/DR5T8CQ2HX7JB724 Kenneth H. Stevenson, 91, of Fargo, North Dakota, passed away on Wednesday, February 3, 2021, in his home under the care of Hospice of the Red River Valley. He was born in Pillsbury, North Dakota, to John and Amelia (Bergstrom) Stevenson. He grew up on the family farm and graduated from high school in Pillsbury, North Dakota. He married Arlien Dreher on May 2, 1950. They lived in Valley City and Oriska, North Dakota, where Ken worked in road construction for Schultz and Lindsay Construction. Ken and Arlien moved to West Fargo in 1966, where Ken worked for O'Day Overhead Door Company until 1974. Arlien passed away in 1973. Ken remarried and started at a restaurant supply company with his second wife, Inez Nelson. They sold the business and started a paint supply store and laundromat, which they operated for ten years before retiring. In retirement, he kept busy working on snowblowers and lawnmowers. He also kept busy with woodworking projects, which he loved. Kenneth is survived by his wife, Esther Stevenson, his children, Susan (Lyle) Weber, West Fargo, ND, Gloria (Bruce) Richard, West Fargo, ND, and Carol Erdman, West Fargo, ND; his sister Ilia Stevenson of Minneapolis, MN and 12 grandchildren, 20 great-grandchildren, and two great-great-grandchildren. He was preceded in death by his parents, his previous wives, Arlien Dreher and Inez Nelson, his two sons Kenneth and Jerry Stevenson along with his brothers Robert Stevenson and Earl Stevenson. In lieu of flowers, memorials are preferred to Hospice of the Red River Valley or Immanuel Lutheran Church, Fargo. Funeral service will be held at Immanuel Lutheran Church on Saturday, February 6 at 2:00 PM with a visitation one hour prior. Burial will be held at a later date.

The family of Kenneth H. Stevenson created this Life Tributes page to make it easy to share your memories.

Send flowers to the Stevenson family.