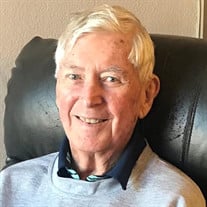 Keith's Memorial Service can be seen here at 2pm, Thursday, April 29: https://vimeo.com/535969044 Keith Junge of Detroit Lakes, died at age 94 in Lilac Homes Memory Care, Dilworth, MN on Tuesday, April 6, 2021. Keith was born in Wichita Falls, TX, and grew up in Braddock, Woods, and West Fargo. He was admitted to West Point in 1945. Having already enlisted in the Navy, he did not enroll. He served on the USS Bunker Hill transporting Pacific troops. After 18 months in the Navy, Keith attended NDSU (then NDAC), and earned his degree in electrical engineering. He was a Bison enthusiast until the end of his life. Keith worked with his father and uncle, Alfred Junge, electrifying rural farmsteads. Their company, Junge Electric, included an appliance store on Main St., West Fargo. After his father died in 1955, Keith filled his father's vacancy on the board of the Fargo State Bank, and he became the sole proprietor for Junge Electric. He married Helen Pershke in 1951 and together they had 3 children. He moved his family to Minneapolis, MN and worked for NSP until his retirement. Helen passed away in 1987. Keith married Joyce Holm of Fargo in 1990. After retirement, Keith and Joyce spent their summers at their Minnesota lake home and their winters in Mission, TX. Keith was an athlete and enjoyed many sports. He especially enjoyed playing golf with his family and friends. He relished every moment at the lake, enjoying time with his growing family. Keith was preceded in death by his parents, Herman Keith Junge Sr. and Irene (Olson); sister, Lota Holly and her husband Donald; wife, Helen (Pershke); daughter, Kathy; and son-in-law, Keith McDougall. He is survived by his wife, Joyce (Holm); and children, Mary Junge (Mark Matasovsky), Michael Junge (Ember Reichgott Junge), LuAnn McDougall, David (Sue) Holm, Jennifer (Mike) Berg; nine grandchildren and nine great-grandchildren. The family of Keith would like to extend their gratitude to the staff of Lilac Homes and Ethos Hospice for the care and compassion they provided every day. A memorial service will be held on Thursday, April 29, 2021 at 2pm with a visitation one hour prior to the service at Hanson-Runsvold Funeral Home, Fargo and will be livestreamed on the funeral home's website.

The family of Keith Junge created this Life Tributes page to make it easy to share your memories.

Send flowers to the Junge family.