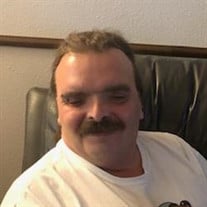 Keith's memorial service can be viewed here: https://vimeo.com/event/2134294 Keith Allen Iten, 50, passed away at Methodist Stone Oak Hospital in San Antonio on April 7, 2022, following a painful medical issue. Keith was born October 4, 1971, to Leonard and Judy (Winter) Iten in Silverton, ND. He then joined his brother, Leen, and sister, Sue, at home in Kellogg, ID. Keith faced many struggles during his first 18 months and had 12 surgeries at this time. He faced many challenges and conquered them all; he was able to enter Elk Creek School at grade level in first grade and was reading and writing in basic braille. He attended public school in Idaho and enjoyed many activities. He wanted to do everything his brother was doing; this included riding motorcycles and snowmobiles with Leen's guidance. He also enjoyed downhill skiing, wearing headphones to tell him where to ski. The family moved to Fargo in 1986, where he attended Fargo North Highschool. He was a member of the wrestling team and graduated in 1990. He soon met his soul mate Krystal Whitson and was engaged in February of 1993. They lived together in south Fargo until she passed away on April 29, 1999. He attended Sister Rosalind School of Professional Massage Therapy starting in 2006 and graduated in the spring of 2008. Keith moved to Texas in the summer of 2008 to join friends. He bought his home in San Antonio in 2014, where he resided until he passed away. He loved his home, the hot weather, and the ease of travel in Texas, which enabled him to have more freedom. Keith was a very active and independent person, which was extremely important to him. Keith was always a positive person and looked on the bright side of life. He had a big heart and was always willing to help a friend. He attended Ski for Light in Deadwood, SD, for many years, along with summer camp for the blind every August. Over his lifetime, he acquired many friends from all over North Dakota. He loved his family and cherished the time spent with his nieces and nephews as well as his godson DJ, who called him grandpa. He is survived by his parents, Leonard and Judy (Winter) Iten, brother, Leen (Jodi) Iten, sister, Sue (Kory) Goulet, nephews, Devin Goulet, Jacob Iten, Hunter Goulet, Zach Iten, nieces, Taylor Iten, Hannah Goulet, Paige Iten, and Keesha Goulet; great nephews, Ethan Goulet, and Leo Iten, great niece, Kylah Goulet, his godson DJ, who spent at least a month with him every summer, and many special friends both here, in Fargo, and in Texas. He was preceded in death by Krystal Whitson, his grandparents, and several aunts and uncles. Keith's memorial service will be held on Friday, May 20, 2022, at 2:00 PM at Faith United Methodist Church, Fargo, ND. Visitation will be held one hour prior. Memorial donations may be made to the North Dakota Association for the Blind (NDAB). ndab.org/home-2/donate or NDBA, PO Box 824, West Fargo, ND 58078.

The family of Keith Iten created this Life Tributes page to make it easy to share your memories.

Send flowers to the Iten family.