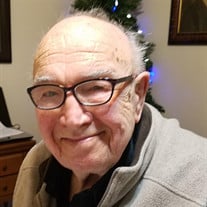 Prayer Service can be viewed at 7:00pm, Thursday, May 28 at this link: https://vimeo.com/421216463 Karl Heinz Zerbe, age 90, was born January 23, 1929 in Chicago, Illinois to German immigrants, Adolf and Anna Zerbe and went home to be with the Lord and his wife of 64 years, Phyllis on December 13,2019. Karl grew up in the Chicago area and joined the Army Air Corps in 1946 and served as a communications specialist until 1948. He then entered the Air Force Reserves serving several years as an aircraft electrician and instructor. After the military, he worked various jobs and finished his working years with AT&T as a security guard for 22 years. On August 21, 1954, Karl married Phyllis Fox. They settled and raised their children in Woodridge, Illinois. In 2013, for a warmer and more affordable retirement, Karl and Phyllis moved to Harvest, Alabama. After Phyllis’ passing in 2019 he moved to North Dakota to live at the North Dakota Veterans Home. Karl had a lifelong love of building and flying model airplanes. After retirement, he enjoyed woodworking, building arbors and other small projects. He was a DIY guy finishing their basement, two bathrooms and several other home projects. He was a life time member of the VFW and active for several years. He served as post commander during his tenure with Post #503, Downers Grove, Illinois. When Karl became a Christian, he became active in the church. Karl and Phyllis both attended Charis Bible College of Chicago completing a Bible Training degree in 2007. After moving to Alabama, they enjoyed hosting and Karl taught a bible study in their home. Karl was preceded in death by his parents, a brother George Zerbe and his wife Phyllis (Fox) Zerbe. He is survived by his son Phillip Zerbe (Diane) of Lombard, Illinois, his daughters, Mary Buchanan (Don) of Madison, Alabama, Patricia Dicks (Vince) of Fargo, North Dakota and Susan Asare from Zephyrhills, Florida along with 12 grandchildren, 14 great grandchildren. The family request in lieu of flowers, please send memorials to the North Dakota Veterans Home Recreation Fund in Lisbon ND or Hospice of the Red River Valley. A private memorial service followed by burial for Karl and Phyllis will be May 29, 2020 at 1:00 PM at the North Dakota Veterans Cemetery in Mandan, North Dakota.

The family of Karl Heinz Zerbe created this Life Tributes page to make it easy to share your memories.

Send flowers to the Zerbe family.