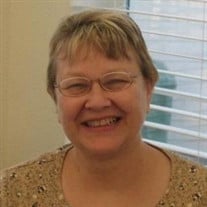 Karen's service will be livestreamed here: https://vimeo.com/571806143 Karen Joyce Bauch Dean went to her heavenly home to be with her Lord and Savior, July 3, 2021 at the age of 69. Karen was born December 16, 1951, in Fargo, ND to Herbert and Joyce (Lorshbough) Bauch. Karen grew up in Fargo, ND. She enjoyed many visits to Wisconsin as a child playing in the hay lofts with her cousins, as well as going to the lake with friends. She graduated in 1970 from Fargo North High School and went on to attend Rapid City National College of Business. Her career almost ended before it started at Dayton's/Target because she decided to go diving into the pool and dislocated her shoulder. Karen was afraid she was going to get fired at her new job, as the Payroll Administrator. Karen and Dan Dean met in the 1960s as kids. Later on in life while on a trip to Colorado in the Summer of 1974, Karen and Dan reconnected and fell in love. They married July 3, 1976, and sadly, Dan lost her 45 years later, on the same day. Karen and Dan lead an adventurous life. While living in Colorado, Karen and Dan were avid "4-wheelers". A particular area on the trail was very extreme. Karen decided to get out of the Scout and hike up the trail with the dogs, while Dan maneuvered up the trail. The frame had twisted on the Scout and the passenger door popped open. Karen ran up the hill, next to the Scout, slamming the door each time it popped open. The mountains were their playground. They later moved to Arizona in 1983 until 1989. They then settled in Georgetown, MN in 1991. As they settled into Georgetown, Karen decided to pursue a career in the medical field at Dakota Clinic (Essentia). She worked in the insurance department. She worked there for 21 years and retired in December 2018 with her beloved co-workers, Norma and Diane. Now that she was closer to family, this lead to her being able to attend her nieces and nephews sporting, church, and school events. Their love of traveling and adventures didn't fade as they took an Alaskan cruise for their 25th wedding anniversary. Many weekends were filled with trips to Mahnomen, MN to the casino, the cabin in Grand Marais, MN, and visiting relatives at the lake. In the fall, the weekends were spent at "the farm" with her sitting in the tree stand waiting for "da thirty point buck." She enjoyed ceramic painting, needle work, creative card stamping, fishing, and hunting. She had won a .22 rifle in a raffle. She called it a pop-gun and decided she wanted a real gun. She then bought herself a 270 Savage Rifle with a scope. "Life's journey is not to arrive at the grave safely in a well-preserved body, but rather to skid in sideways, totally worn out, shouting 'Holy cow... what a ride!'" Karen is survived by her husband Dan Dean of Georgetown, MN; brother Rod (Karen) Bauch of Somerset, WI, and sister, Kris (Bob) Haskins of Baldwin, ND; as well as 11 nieces and nephews, several aunts, uncles and "the cousins." She is preceded in death by her loving parents, Herbert and Joyce Bauch and niece Samantha Bauch. In Lieu of flowers send donations to: Juvenile Diabetes Research Foundation, 3001 Metro Dr. #100, Bloomington, MN 55425 or Website for donations: jdrf.org, Click Donate, then memorial donation.

The family of Karen Joyce Dean created this Life Tributes page to make it easy to share your memories.

Send flowers to the Dean family.