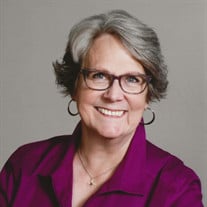 Julie's memorial service can be viewed here. https://vimeo.com/703882526 Julie Schauer Helgaas, educator of 40 years and devout Episcopalian, died Thursday, April 21, 2022, at Sanford Hospice in Fargo, North Dakota. She was 81 years old. A lifelong learner who loved to teach others, Julie was born Julie Ann Engelter in 1940 in Tulsa, Oklahoma, to parents Harriet and George Engelter. She moved many times as a child to California, Missouri, North Dakota, Iowa, Nebraska, and Colorado. The time she spent as an 11-year-old in Mandan, North Dakota, was her fondest. When she completed high school, she moved from Pueblo, Colorado, to Jamestown, North Dakota, to attend Jamestown College. In her freshman year, she met James Schauer, and they married after graduation in 1963. She later went on to earn her master’s degree at South Dakota State University in Brookings, South Dakota. After completing higher education, she taught PE and Spanish in Ellendale, ND. In 1969 she moved back to Jamestown, where she taught PE at her alma mater till 1982. Between the years of 1976 and 1980, she bore three beautiful children: Sarah, James, and Thomas. In 1982, she began teaching Spanish at Jamestown high school, where she remained until retirement. In 1987 her husband James Schauer died of Leukemia. In 1997 she married Maynard Helgaas in Jamestown, and a decade later, they moved to West Fargo to be closer to their family. She was an avid golfer and loved to teach others. She coached the girl's high school golf team for many years and continued to mentor young girls well into her 70s, totaling 20+ years of golf instruction. In her free time, she taught young girls the art of knitting and calligraphy. She loved to give and was a proud member of the Fargo PEO Chapter AT, which provides financial assistance to women so they can pursue higher education. Along with being a teacher, Julie was a constant learner. She loved to learn new things, master them, and teach them to others. She was a master gardener, and her garden beds slowed traffic. Her holiday meals were formal. The place setting was intricate, complete, and always century-old antique silver that had been laboriously maintained and polished. She competed in quilting and knitting competitions and was awarded Grand Champion many times over. Her detailed calligraphy and other art adorned her home and the homes of her friends and family. She was a true renaissance woman. Julie was an active member of Grace Episcopal Church in Jamestown and Gethsemane Episcopal Church in Fargo. She taught Sunday School, was on the Vestry, the Foundation, Chapter, Altar Guild, Head of Stewardship, Delegate to State Convention, Delegate of National Convention, Secretary of the Convention of the ND Episcopal Diocese, attended many stewardship conventions, etc. Julie always felt it was a privilege to serve her church as opposed to it being an obligation. She would like to be remembered as a woman of great faith. She knows in her heart God has a plan, and she believes in his plan. Julie is survived by her three children, Sarah Jarrell (Brad), Jim (Amanda) Schauer, and Tom (Summer) Schauer. Seven grandchildren, Cooper, Spencer, Stone, Claire, Etta, Sienna, and Leni. Her sister, Barb Studenka. Husband, Maynard, and four stepchildren, Ann Kumm, Kathryn Burgum, John Helgaas, and Julie Dunwoodie. Her greatest joy in life was being surrounded by her family on holidays. Her Christmas tree was a work of art, her home was warm and inviting, and her dinner table was elegant. Julie was sophisticated, classy, and beautiful. She will be dearly missed by all who know her. Donations can be made in her honor to the Gethsemane Episcopal Church in Fargo, North Dakota. https://gethsemanecathedral.weshareonline.org/

The family of Julie Ann Helgaas created this Life Tributes page to make it easy to share your memories.

Send flowers to the Helgaas family.