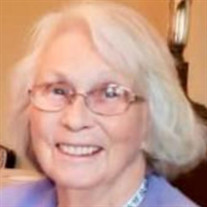 Joyce Dellerise Stave was born June 17, 1935 to Nels and Violet Flom in Osnabrock Township near Langdon, North Dakota. She spent her childhood years on the family farm, attending Osnabrock Township schools through her sophomore year. Her family then moved to Fargo, North Dakota, where she spent her junior and senior years at Oak Grove Lutheran High School in Fargo, North Dakota, graduating in 1953. She graduated from Concordia College in Moorhead, Minnesota in 1957. For her junior year of college, Joyce attended Augsburg College in Minneapolis, Minnesota. Joyce married Roderick Neal Stave June 1, 1957. They lived their life together raising their three children; teaching in many towns in Minnesota, principally in Wadena; farming near Rod’s childhood South Dakota home; plus living two years in Chicago, Illinois, where Rod served in the 5th Army Band and where their first child, Roderick Neal Stave, Jr, was born in 1958. After their children had flown the coop, Joyce especially valued being an Early Childhood Educator in Park Rapids, Minnesota, for young children and their parents. Their retirement years were enjoyed in their beautiful riverside Park Rapids home and enriched by travelling throughout the United States in their camper trailer. They also travelled to Norway several times to reconnect with the country from which their grandparents had emigrated. Faith and church were an essential part of life for Joyce and Rod. They were very involved in Zion Free Lutheran Church in Wadena and Faithbridge Church in Park Rapids while they lived in those towns. God gifted Joyce with a beautiful voice. As a soloist, she used this talent to sing praise to her Lord and Savior in many churches throughout her whole life. On January 27, 2020, Joyce passed to be with her Lord and Savior, Jesus Christ, in Heaven. What a wonderful gift she was to us all! Joyce is survived by her loving husband of nearly 65 years, Roderick; her children, Roderick Jr., Mark of Forest Grove, Oregon, and Melodee with her husband Daniel Waite of Parker, Colorado; her brothers and sister-in-laws, Gerald and Kay Flom of Grand Forks, ND, and Neil and Susan Flom of Detroit Lakes, MN; her sister-in-law, Idell Flom; and, her grandchildren in Oregon: Lindsey and Jon Lawton, Michael, Ryan, Cole, Aaron and Kiersten. Joyce was preceded in death by her parents, Nels and Violet Flom; her brother, Wayne Flom; her father-in-law and mother-in-law, Theodore and Josie Stave; and, her sister-in-law, Diane R. Stave. Joyce will be buried in Ferkingstad Cemetery on Friday, June 5th at 1 pm. The cemetery is located on the Stave homestead near New Effington, South Dakota.

The family of Joyce Dellerise Stave created this Life Tributes page to make it easy to share your memories.

Send flowers to the Stave family.