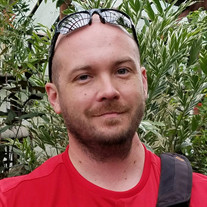 Joshua's service can be viewed here: https://vimeo.com/477367843 Joshua Allen Fenster, 37, of Valley City, ND, passed away on Saturday, November 7, 2020 in the Sanford Medical Center in Fargo, ND. Joshua was born February 22, 1983, in Bismarck, ND to Rodger and Rebecca Fenster. He attended the University of North Dakota, graduating with a degree in Anthropology. In his first semester at UND, he met his future wife, Emily Slominski, in an Anthropology class. After graduating from UND, Joshua joined Emily in Ohio to support her through her years in graduate school. They married in the Hocking Hills area of Ohio on June 27, 2009. In 2013, they moved back to North Dakota. He was employed at Walmart for the last 14 years in Ohio and North Dakota, and he was valued as a versatile and responsible worker. He was a quick learner with a relatable sense of humor who could easily find ways to connect to coworkers and customers. Known by his family and friends as someone who enjoyed the simplicity of nature, he liked any activity that would get him outdoors, including backpacking, hiking, fishing, snowboarding, snowshoeing, photography, going to concerts, and hanging out in his hammock. When he wasn’t busy with his various hobbies, he could be found watching his beloved soccer team, Manchester United, with his dog Zephyr. Joshua is survived by his wife of 11 years, Emily; his parents, Rodger and Rebecca Fenster; his sister, Nichole (Steve) and their children, Kai and Leila; his sister Kennedy (Adam); and many aunts, uncles, and cousins. He was preceded in death by his grandparents, Irene and Floyd Fenster; and grandfather, Andrew Wickstrom. Joshua's Tribute Video can be viewed and copies ordered here: https://www.tributeslides.com/tributes/show/ZBBC5WJBZXSLPW84

The family of Joshua Allen Fenster created this Life Tributes page to make it easy to share your memories.

Send flowers to the Fenster family.