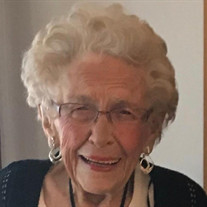 Josephine “Jo” Dean (Handy) Grondahl passed away peacefully on November 28, 2019, Thanksgiving Day, in her new home at the Pioneer House assisted living facility. It was a fitting day as she led a full life with much to be thankful for. Josephine was born April 28, 1920 in Oakes, ND to Emery and Daisy (Ballard) Handy. She was the youngest in the family with 5 older brothers. After attending the University of Iowa in Ames, IA, she moved to Fargo, ND where she married Melvin “Bud” Grondahl in 1943. They raised their family there and she worked for the Disabled America Veterans for 30 years. She was an active member of the First United Methodist Church throughout her adult life. Jo enjoyed her life after retiring from the DAV by spending time with the many groups she was a member of including Homemakers, Red Hats, Daughters of Norway Rosanna Gutterud Lodge, Fine Arts Club, NDSU International Women’s Association, Bridge clubs, Widow and Widowers, Volkssport Assn. and Al-Anon. She also traveled extensively throughout the world including annual trips to California to spend time with her transplanted children. Jo was an inspiration to all that knew her for how she was always “on the go”. She is survived by children and their spouses Linda (Khal); Larry (Amy); step-grandchildren and their families; nephews, Brad (Deona) Grondahl, Bob Handy and Michael Handy; niece, Cynthia Handy; adopted families of Bill and Kathy Urie and Wei and Yun Deng; and too many close friends to mention. She was preceded in death by husband, Melvin “Bud”. A sincere thank you goes out to Hospice of the Red River Valley and Bernadette Raguse, who looked after her in her final year, and the staff at the Pioneer House, all who provided unconditional support in her final days. A celebration of her life is planned on the date of her 100th birthday in late April. Memorials are requested to be given to Hospice of the Red River Valley, the NDSU Music Department or the Plains Art Museum.

Josephine &#8220;Jo&#8221; Dean (Handy) Grondahl passed away peacefully on November 28, 2019, Thanksgiving Day, in her new home at the Pioneer House assisted living facility. It was a fitting day as she led a full life with much to be thankful... View Obituary & Service Information

The family of Josephine Grondahl created this Life Tributes page to make it easy to share your memories.

Send flowers to the Grondahl family.