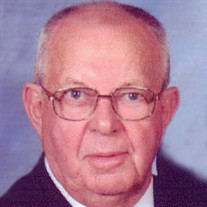 Joe's Memorial Service can be viewed here: https://vimeo.com/455821544 Joseph A. “Joe” Peterson was born April 4, 1926 in Guelph, ND to Rev. Andrew P. and Anna Rose Peterson. They were serving Methodist congregations in Guelph and Ellendale, ND. Joe received his education in Sidney, MT, Minneapolis, Dawson and Clarkfield, MN. Joe served in the U.S. Army from 1944 until 1946. He was with the 13th Armored Division in Germany when the war ended there. He finished his service with the 2nd Armored Division at Ft. Hood, Texas. Joe and Jeannette Elizabeth Koch of Gatesville, Texas, were married in Waco, Texas on September 28, 1946. Jeannette was completing her education as a registered nurse in Waco. After farming for four years near Montevideo, MN, Joe began his employment with Northern States Power Company in Montevideo, as a draftsman in the engineering department. He continued his education in Electrical Engineering through correspondence courses with the University of Minnesota, and International Correspondence Schools of Scranton, Penn. After 12 years in the Engineering Dept., Joe transferred to the Utility Sales Dept. In September of 1965, Joe accepted a transfer to Fargo, ND as an Industrial Sales Representative with NSP. He later was promoted to Sales Manager, Consumer Services Manager and finally to Distribution/Engineering Manager, with responsibilities for Electrical and Gas Engineering and Marketing, a position he held until his retirement on January 29, 1988. Joe appreciated being able to work for NSP Co. for 37 years. Joe was active in church, community and business organizations in both Montevideo and Fargo. He taught Sunday school and served on the church council at Trinity Lutheran church in Montevideo. He held various positions with the Montevideo Jaycees, including president, of the local chapter. In Fargo, he was on the church council of Olivet Lutheran Church and served as president of the congregation for a term. He was a 25-year member of “Gateway” Lions club, serving as club president in 1975-76. Joe was on the board of trustees for St. Luke’s Hospital (Meritcare) for 6 years and was chairman of the board in 1985 and 1986. He also served on the board of Meritcare Foundation and the Fargo Chamber of Commerce. He was active in various trade and business groups, including the Fargo-Moorhead Electric Industry Association, and Sales and Marketing Executives. Joe served a 5-year term with the North Dakota State Board of Electricity, from 1986 until 1991. The most important thing in Joe’s life was always his family, especially Jeannette, the children, grand children and great-grandchildren. In retirements, Joe and Jeannette continued to live in Fargo, but had more time to travel and spend time with their family. They enjoyed wintering in Florida and Texas for several years, and took many long road trips. Joe is survived by two sons, Joel (Connie) Peterson of Fargo, Karl (Maria) Peterson of Salt Lake City, and two daughters, Elizabeth Howard of Tampa, FL, Susan (Michael) Koesterman of Moorhead, eight grandchildren, seven great-grandchildren and one brother, Benjamin (Iola), of Moorhead. He was preceded in death by his wife, his parents and three brothers; David, Samuel and Roderick. Memorials are preferred to Olivet Lutheran Elevator Fund or Churches United for the Homeless. In accordance with the CDC regulations regarding Covid-19, masks are required and social distancing should be practiced.

The family of Joseph Peterson created this Life Tributes page to make it easy to share your memories.