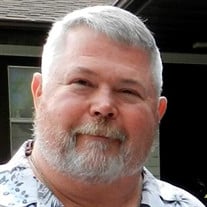 John Sanderson, born July 19, 1951 in Biloxi, MS to Warren and Gloria (Anderson) Sanderson, died March 25, 2018 in Fargo, ND due to complications of Agent Orange. John served his time in Vietnam from 1970 to 1971, being wounded twice, once in the leg and later having his back broken ending his time in Vietnam and earning him a Purple Heart. After recovering, John spent the last year of his service in the honor guard out of Fort Carson, CO transporting fallen veterans to their final resting place. He returned to Fargo to attend college at NDSU, graduating with a degree in criminal justice and a minor in history. John reunited with Julie Colligan after a hiatus, and the two married July 3, 1975, spending 43 happy years enjoying family and friends, hunting, fishing and traveling together. The same year, John started his career with the Fargo Police Dept on May 26, 1975, rising to the position of Lieutenant. In his 27 years with the department, John was the driving force in the department's change of equipment from a six-gun to an automatic handgun to keep up with the times. He was also an integral part of the establishment of the Fargo SWAT Team, becoming its first Commander. This was his pride and joy and look where we are today. After retirement from the police department in 2001, he was called on to set up a TSA office at the Fargo Airport. After 7 years, he retired from working to enjoy life. In a time of crisis, he worked closely with Dennis Walaker during the flood of 1997 to coordinate what was needed to protect our city. John spent 18 years as an ND Air Guard Happy Hooligan serving in various positions in Fargo, and was involved in competitive pistol shooting with the NDSU Pistol Team and with the Air Guard Pistol Team in which he excelled to Master. He was an American proud to serve his country. His wit and wisdom will be missed by all. He is survived by his wife Julie; mother, Gloria Overboe and step-father, Gerald Overboe; half sisters, Cindy (Steve) Melicher, and Sue (Bruce) Nelson; and sister-in-law, Sue (Bruce) Sanderson along with many nieces and nephews. He was preceded in death by his grandparents, father, Warren, and brother, Bruce.

John Sanderson, born July 19, 1951 in Biloxi, MS to Warren and Gloria (Anderson) Sanderson, died March 25, 2018 in Fargo, ND due to complications of Agent Orange. John served his time in Vietnam from 1970 to 1971, being wounded twice, once in... View Obituary & Service Information

The family of John Robert Sanderson created this Life Tributes page to make it easy to share your memories.

Send flowers to the Sanderson family.