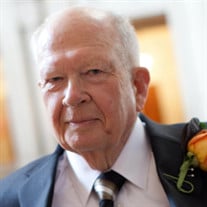 John George Riemann, 93, of Fargo, ND, passed away peacefully at home on August 31, 2021. John was born in Gladstone, New Mexico on June 18, 1928 to Rebecca “Grace” (Franklin) and John T. Riemann. He grew up on the family farm outside of Gladstone and graduated from Farley High School. He went on to attend Texas Tech University, receiving bachelor’s degrees in biology and bacteriology. Following college, John enlisted in the US Army and was stationed in Yokohama, Japan, where he served as a medic for two years during the Korean War. After returning to the US, he attended graduate school at the University of Texas, earning his master’s in bacteriology and a doctorate in zoology. His research focused on genetics and entomology and led to teaching and research positions at West Texas State, the University of Texas, Tulane University, Sorbonne University in Paris and North Dakota State University. John spent the latter part of his career at the US Department of Agriculture in Mission, Texas and then in Fargo, where he ran a research laboratory and met Barbara, his wife of 39 years. During his time at the USDA, John was involved in the development of techniques to genetically modify dangerous insects to stop reproduction and control their populations, researched insect chromosomal structure, and studied the impacts of radiation and the influence of circadian rhythms on insect population growth. John continued to consult and review journal articles long after his retirement in 1996. John was soft spoken with a great sense of humor, and was always willing to share a story about his adventures exploring the open spaces of New Mexico, Texas and northern Mexico with his siblings and friends. As a young kid, he was tasked with herding sheep while riding his beloved horse, occasionally shooting a rattlesnake for good measure. He developed a lifelong love of nature and exploration, and toured the United States coast to coast in his VW camper. Later in life, he led his family on these tours around the country and beyond, sharing his passion for nature, hiking and camping with his wife and children. Hikes with John reflected his deep appreciation of nature’s beauty - large and small - as he’d point out details of a plant, insect or animal, or collect these with his children. He particularly loved the lake country and made a weekend project of building a cabin for his family on Johnson Lake over many years. He enjoyed a good discussion on politics and the latest scientific articles, and he loved a good mystery or history book. John lives on through the kind, thoughtful, adventurous spirit that he shared with those around him, and the family that loves him so dearly. John is survived by his daughter, Andrea (Geoffrey) Nudd of Atherton, CA, and son, Michael Riemann of Fargo, ND; three grandchildren, Katherine, Henry and Thomas; and five nieces and nephews. He was preceded in death by his wife, Barbara (Thorson) Riemann, his parents, and siblings Donald, Dorothea, Frank and Melvin. A private family service will be held. Burial will be in Bethlehem Lutheran Cemetery in Fergus Falls, MN.

The family of John George Riemann created this Life Tributes page to make it easy to share your memories.

Send flowers to the Riemann family.