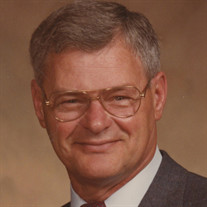 John Robert Ohnstad, 93, of Fargo, ND, passed away on Wednesday, October 2, 2019, at his daughter’s home in Afton, Wyoming. He received his angel wings and can once again soar with the eagles. John was born to Olaus and Sophia Ohnstad in Gardner, ND on October 16, 1925, grew up in Fargo and graduated from Fargo Central High School, class of 1943. In 1943, he was drafted in the Marines. He married Rose D. Matthiensen and the following day, left for boot camp in San Diego. He served in the Pacific Theater during WWII. After the war he trained as an auto body mechanic at Hanson Mechanical Trade School. He worked for Ed Schum Pontiac until it closed, then Berkey & Crary Lincoln Mercury, first as a body man, then as a salesman. An opportunity presented itself to work for OK Tire Store and much to his wife’s disappointment there would be no new car to drive and much less pay. Luckily, John saw the chance to become his own boss and became sole owner in 1960. John was an avid hunter all his life. Rose learned new recipes for cooking moose, elk, deer, duck, pheasant, and fish. It takes a long time to use up 2,500 lbs. of moose meat, us kids could smell it cooking three blocks away. John joined the Experimental Aircraft Association (EAA), and began a lifelong love with all aspects of aviation. In 30 years, he and Rose never missed the annual trip to Oshkosh, Wisconsin for the air show. With 23 years in the making, John finished his amphibian airplane called the “COOT”. With the help and encouragement from his good friends Ron Hendrickson and Morrie Goodwill, he finally flew it. While building the “Coot” at Big Cormorant Lake, he also managed to add a “small” addition to the cabin consisting of an indoor swimming pool, 2 master suites, 3 bathrooms, a pool shower, and rec room. John always considered his work as fun, and quite often his family had to take away his tools so he would stop working and play with the grandchildren. Tire company reps would often come with papers to sign and were told they had to climb the ladder to the roof where he was working. Most of them did, then bragged to their bosses the lengths they had to go to get his signature. Next year will be OK Tire’s 60th anniversary with 13 locations throughout North Dakota and Minnesota. John and Rose traveled extensively to company conventions in Europe, South America, Asia, and the Caribbean. Spent many winters in Mesa where they had a condo, and summers on Big Cormorant Lake. John and Rose were married 73 years before her passing in January 2018. John is survived by his son James (Catherine); daughters, Kathleen (Court) Slabaugh and Wendy (Jeff) Smith; grandchildren, Tawny (Brady) Brolin, Mallory (Jason) Radcliffe, Brittany Ohnstad, and Vanessa (Alex) Knox; great-grandchildren, Adalynn Radcliffe, Calum Brolin, and Leo Knox; his brother, William H. Ohnstad; sister-in law, Joanne Ohnstad; brother-in law, George (Phyllis) Matthiensen; and many nieces and nephews. He was preceded in death by his wife, Rose; daughter, Linda; brother, Alden Ohnstad; half-brother, Harold Christman; and half-sisters, Caroline Stewart and Ester Beckwith. Our sincere thanks to Kendra and the staff at TOUCHMARK Memory Care. In lieu of flowers a donation to the Alzheimer’s Association, Minnesota-North Dakota Chapter, 7900 West 78th Street, Suite 100, Minneapolis, MN 55439.

John Robert Ohnstad, 93, of Fargo, ND, passed away on Wednesday, October 2, 2019, at his daughter&#8217;s home in Afton, Wyoming. He received his angel wings and can once again soar with the eagles. John was born to Olaus and Sophia Ohnstad... View Obituary & Service Information

The family of John Robert Ohnstad created this Life Tributes page to make it easy to share your memories.

John Robert Ohnstad, 93, of Fargo, ND, passed away on Wednesday,...