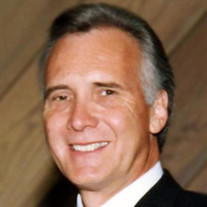 John Luthi, 74, of Fargo, ND was called to his eternal resting place on September 20, 2020 under the care of Hospice of the Red River Valley. He entered this world on October 23, 1945 in Los Angeles, CA, born to Alfred and June Luthi. John served in the US Army signal corps for six years ending at a rank of Sergeant. He received an honorable discharge in 1974. John was part owner and member of the board of directors for Luthi Machinery in Gardena, CA, retiring in 2000. John was a wonderful, caring husband, father, brother and uncle. All who knew John loved him, appreciated him beyond words, and admired him for his exceptional character. He was an outstanding role model for his two younger brothers, Bob and Gary. They both learned so much about being a man just being around him. John was an involved and loving dad to his three children, Jeremy, Janelle, and Jonathan. He enjoyed coaching their teams when they grew up and spending quality time with them. He shared many interests with each of the kids, including a mutual love of cars, old and new. John’s interests included collecting and restoring old toy cars, his Dinky toy collection, Die-Cast car club, slot car racing and building, and all kinds of auto racing. He was a big Lakers and Dodgers fan and was a history buff – especially interested in wars and airplanes. John is survived by his wife, Sue; children, Jeremy, Janelle (Bill), and Jonathan; brothers, Bob (Lois) and Gary (Sheila) Luthi; six grandchildren, Brody, Bryson, Jessa, Jonah, Josiah, and Bear; several nieces and nephews; brothers-in law, Rod (Pam) Ost, Ron (Traci) Ost, Rick Ost, Dennis (Paula) Ost, Doug (Bonny) Ost, Russ (Peggy) Ost and mother-in-law, Ethel Ost. He was preceded in death by his parents and grandparents. A Celebration of Life will be held at 2pm on Saturday, October 17, 2020 at the family home in Fargo. In lieu of flowers, memorials are preferred to Hospice of the Red River Valley.

John Luthi, 74, of Fargo, ND was called to his eternal resting place on September 20, 2020 under the care of Hospice of the Red River Valley. He entered this world on October 23, 1945 in Los Angeles, CA, born to Alfred and June Luthi. John... View Obituary & Service Information

The family of John Stephen Luthi created this Life Tributes page to make it easy to share your memories.

John Luthi, 74, of Fargo, ND was called to his eternal resting...

Send flowers to the Luthi family.