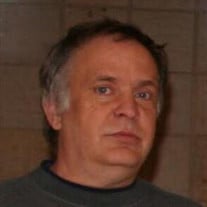 John Kapfer, 66, Fargo, North Dakota, died on Wednesday, April 22, 2020 at Sanford Medical Center with his daughters present, surrounded by love. John Lowell Kapfer was born in Bismarck, ND, the son of Elroy and Lois (Loose) Kapfer. He grew up in Jamestown, ND and graduated high school in 1971. He married Sarah Judd on July 14, 1973. They had two daughters together. John was kind of a “jack of all trades”. Over his lifetime, he worked as a mechanic, built fire sprinkler systems, drove truck, and was an associate in a car parts warehouse. John was diagnosed with Chronic Lymphocytic Leukoma (CLL) in June of 1999. He was a medical miracle and never did what the medical books said. He did not lose his hair from chemo, survived a heart attack, a fungal infection, colon cancer, and a severe brain bleed. His medical team and his family were always amazed at his ability to defy the odds. John suffered a stroke on April 11, 2020 that lead to the end of his fearsome fight. His pride and joy were his family. He always stepped in to help whether it was watching the grandkids while another was arriving or later giving them rides to appointments. John enjoyed playing cards, especially Pinochle, doing Sudoku puzzles, watching the plays his granddaughters were involved in, and tinkering with cars. John is survived by his daughters, Kristine (Jamison) Reineke and Michelle (Joshua) Baumer, both of Fargo, ND; seven grandchildren, Rebecca Reineke, Vanessa Reineke, Karina Reineke, Matthew Baumer, Markus Baumer, MaryAnn Baumer, and Madeline Baumer; and his special friends Robert and Cathy Grabinger. He was proceeded in death by his parents, stepmother, Phyllis, brother, Michael Kapfer, and one grandson lost before birth. A Memorial Service will be held on Monday, April 27th, 2020 at 7 pm at the Hanson-Runsvold Funeral Home for immediate family only. The service will be streamed online for all those that wish to attend. The family plans to wait until after the current social restrictions are removed to have an internment ceremony at Gem Cemetery in Woodworth, ND and get together. More details will follow once the restrictions have been lifted. Memorials are preferred to the American Cancer Society in lieu of flowers. Thank you to all the medical professionals at the Sanford Roger Maris Cancer Center for all the care you gave him over the last 21 years, especially Becky Fidler DeJong. John's Video Tribute can be viewed here: https://www.tributeslides.com/tributes/show/SL9WYJ7LCWCCHNXL

The family of John Lowell Kapfer created this Life Tributes page to make it easy to share your memories.

Send flowers to the Kapfer family.