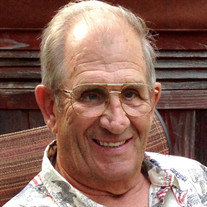 Memorial Service will be streamed here: https://vimeo.com/445224238 John (Jack) Murphy was born on May 19, 1941 and passed under Hospice care on Sunday, August 2, 2020. He was born and raised in Hankinson, ND, by his parents, Dorothy (Kath) and Art Hanson. Jack attended school in Hankinson, graduating from high school in 1959. Immediately following graduation, he joined the Army and served with the 101st Airborne Division. He was stationed at Fort Campbell KY and Fort Buchanan, Puerto Rico. Following his service, Jack attended college at North Dakota State College of Science graduating in 1964. He continued his education by obtaining a degree in Vocational Education through Bemidji State University in 1985. Jack was united in marriage to Norma Gabbert on August 31, 1963 at Emmanuel Lutheran Church in Hankinson, ND. The couple was blessed with two children; a son Mark, and a daughter, Monica. Jack and Norma also have 3 grandsons. Jack began his professional career in the field of construction electricity. He was employed at Rick Electric in Fargo, ND and later started his own electrical contracting business, Murphy Electric, which operated for 20 years. After selling Murphy Electric, Jack was able to share his knowledge and expertise of construction electricity with students as an instructor at Moorhead State Community and Technical College, retiring after 11 years of teaching. Jack also served on the North Dakota Contractors Association Board. He was a lifetime member of the American Legion, the VFW, the 101st Airborne Association, and the 187th Airborne Association. During their retirement years, Jack and Norma greatly enjoyed travelling. They felt a good sense of accomplishment to have visited every state in the union, most provinces in Canada, and 27 countries. Jack was known for his ready smile, his love of life, feeding the deer, watching the geese, sharing jokes, and his gratitude for the blessings he enjoyed. He was often heard to comment, “I’ve had a good life”. Jack is survived by his wife, Norma, Fargo, ND, his children, Mark (Nadine) Murphy, Galveston, TX, and Monica (Brad) Sunderland, Fargo, ND, and two grandsons, Lawson Murphy and Gavin Sunderland. His siblings, Bruce (Lynda) Murphy, Hankinson, ND, Lynn (Nancy) Hanson, Fort Wayne, IN, Gail (George) Resler, Breckenridge, MN, Barry (Judy) Murphy, Palmyra, TN, and Ronnie Murphy, Clarksville, TN. He was preceded in death by his father, Art Hanson, mother, Dorothy Hanson, in-laws Louie and Irene Gabbert, brother-in-law, Gary Gabbert, and grandson, Mason Murphy. Services will be held at Living Waters Church in Fargo on Thursday, August 6, 2020. Visitation will start at 11:00 a.m. with the memorial service to follow at noon. John Preston Murphy will be laid to rest at Fargo National Cemetery in Harwood, ND at 2:00 p.m. If attending the funeral, masks will be required in the church and we ask that you observe social distancing protocols. Jack’s favorite color is green. Please consider wearing the color green if you should have it in your wardrobe. In Lieu of flowers, the family requests memorials be made to Hospice of the Red River Valley or HOMES FOR OUR TROOPS.

The family of John (Jack) Preston Murphy created this Life Tributes page to make it easy to share your memories.

Send flowers to the Murphy family.