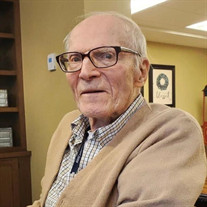 John's tribute video can be viewed here. https://www.tributeslides.com/tributes/show/3KGLK937T38HRZ4Y John "Jack" Carter, 95, of Fargo, ND, passed away on January 15, 2022, at his home with his family by his side, under the care of Ethos Hospice. John entered this world on December 25, 1926, in Grand Forks, ND, born to James and Frances (Boese) Carter. He grew up in Grand Forks, Alexandria, and Minneapolis, eventually ending up in Fargo. John served in the US Navy from 1945-1946, after which he attended North Dakota State University, where he was a member of the Theta Chi Fraternity. It was there that he met Beverly Sandbeck. John married Beverly Sandbeck on June 12, 1953, in Olivet Lutheran Church. This began a beautiful partnership lasting 67 years of many adventures. John taught phy-ed for a short time before he started his career as a Postal Worker. He began with Railway Mail and then began his 30-year career at the Moorhead Post Office. John was happiest when he was hunting or fishing at his home on Grace Lake. He loved being with his family and always wanted to have them around. John is survived by a son, Jack Carter, Fargo, ND, two daughters, Susan Carter, Fargo, ND, and Karen (Dean) Riemer, West Fargo, ND; grandchildren, Robyn (Nick) Scherling, Katie (Jason) Damm, Nicholas Riemer, Stephanie Carter; great-grandchildren, Caden Damm, Maverick and Addison Scherling. He was preceded in death by his wife, Beverly; parents, James and Frances; son, Steven Carter; siblings; William Carter, Norma Kress, Robert Carter; and a great-granddaughter, Caleigh Damm. Funeral service will be held Thursday, January 20, 2022, at 2:00 P.M., with a visitation starting at 1:00 P.M. at Olivet Lutheran Church, Fargo, ND. Burial will be at Riverside Cemetery, Fargo, ND. Memories and condolences may be shared at www.hansonrunsvold.com Arrangements entrusted to Hanson-Runsvold Funeral Home - Fargo, ND

John's tribute video can be viewed here. https://www.tributeslides.com/tributes/show/3KGLK937T38HRZ4Y John "Jack" Carter, 95, of Fargo, ND, passed away on January 15, 2022, at his home with his family by his side, under the care of Ethos Hospice.... View Obituary & Service Information

The family of John "Jack" Carter created this Life Tributes page to make it easy to share your memories.

Send flowers to the Carter family.