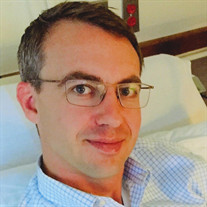 John Edward Harnisch The flame that burns twice as bright burns half as long. – Lao Tzu John Edward Harnisch, 39, lost a heroic battle with alcohol addiction on January 3, 2020 at Norwalk Hospital in Norwalk, CT. From a young age, his intelligence and curiosity of all things were apparent. He was extremely sensitive, generous, kind, articulate, and could light up any room that he entered with his smile and fun, easy-going personality. John had a passion for reading, especially World War II history. He enjoyed all types of music and played both piano and the tenor saxophone. He was a talented tennis player making the North High Varsity tennis team in seventh grade. John loved animals including his childhood dog, Dinky, and his two Bullmastiffs, Bailey and Trace. He enjoyed life to its fullest – focusing on career, traveling, driving fast cars, enjoying cooking and appreciating fine dining. He was tenacious and principled… inside an adventurous soul. Born on July 7, 1980, to Douglas and Roberta Harnisch in Fargo, North Dakota, John attended Longfellow Elementary School, Ben Franklin Junior High and graduated from Fargo North High School in 1998. He went on to study economics and history at Trinity College in Hartford, Connecticut, graduating in 2002. After graduating, his analytical mind and talent for understanding the complexities of the financial world lead him to his first job at Babson Capital Management from 2003 to 2007, a division of Mass Mutual. There he focused on high yield credit analysis with an expertise in printing & publishing and aerospace & defense sectors. During this time, John earned the prestigious Chartered Financial Analyst (CFA) charter and became a CFA Charterholder. John worked at Acuity Capital Management from 2007 to 2016. He joined Acuity as a credit analyst and was promoted to portfolio manager to jointly manage Acuity’s Corporate Opportunity fund in 2010. John was also responsible for managing all of Acuity’s credit investments including helping to manage the WHV/Acuity Tactical Credit Long/Short Fund that was ranked number one by Morningstar in 2015 and 2016 and worked closely with Wilmington Trust and Sandalwood Securities managing credit portfolios. John joined Shelton Capital Management after the merger of Acuity and Shelton, and subsequently managed the Shelton Tactical Credit Fund and oversaw all credit investing at Shelton. John suffered from alcohol addiction, a disease he struggled acutely with for the last five years. He was a fierce and persistent fighter but was unable to overcome the throws of this disease. John was preceded in death by his grandparents, Robert and Wilhelmina Harnisch and Maurice and Roberta Petitmaire, and his aunt, Margaret Meany. He is survived by his daughter, Elizabeth Harnisch, and her mother, Rebekah Mate; his parents, Douglas and Roberta Harnisch; his sister and brother-in-law, Brooke Harnisch and Daniel Roberts; his nephews, Owen and Luke Roberts; his sister and brother-in-law, Jennifer and Michael Verbic; his nephew and niece, Michael and Grace Verbic; his aunt and uncle, Yvonne Petitmaire and James Charton; his cousins, Christopher Charton, Michael and Richard Gomez; and friend, Jessica Paoli. A memorial service will be held at 11:00 AM on Saturday, February 1, 2020 at First Presbyterian Church, Fargo, ND. In lieu of flowers, the family requests that donations be sent to Alcoholics Anonymous, Adopt-A-Pet or the American Society of the Prevention of Cruelty to Animals (ASPCA).

John Edward Harnisch The flame that burns twice as bright burns half as long. &#8211; Lao Tzu John Edward Harnisch, 39, lost a heroic battle with alcohol addiction on January 3, 2020 at Norwalk Hospital in Norwalk, CT. From a young age, his... View Obituary & Service Information

The family of John Edward Harnisch created this Life Tributes page to make it easy to share your memories.

The flame that burns twice as bright burns...

Send flowers to the Harnisch family.