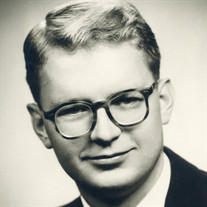 John died Friday, June 14, 2019 at 11:30 p.m. under the care of Hospice of the Red River Valley at Rosewood Nursing Home with his wife Leslie and daughter Molly at his side. Born to Agnes (Oie) and William Morris Guthrey August 4, 1929 in Ardmore, Oklahoma, he spent his childhood years between Ardmore, Oak Park, Illinois, and at his grandparents’ farm in Portland, North Dakota. He graduated high school in Maywood, Illinois. He served in the U.S. Army during the Korean Conflict, and, returning to the U.S., became a graduate of Augustana College, Rock Island, Illinois with a degree in chemistry. He worked for the Diversey Corporation in Chicago as a chemist. He then entered Luther Seminary, St. Paul, and was ordained as a Lutheran Pastor, serving congregations in Hunter-Gardner, Golden Ridge, Fargo, and St. Thomas. He also was chaplain at Mayville nursing home, Bethany Homes, Fargo, and the VA Medical Center, Fargo. John married Leslie in 1967 and, to his delight, instantly became a father to two young boys, Mark (12) and Matthew (8). They moved to North Dakota the same year. A daughter, Molly, was joyously born into the family in 1969 on Father’s Day. His life was complete! Living in Fargo, John worked as supervisor of the chemistry labs at (then) Moorhead State University until he retired. Growing up during WWII, his interest in reading about the war grew with the years. He relished books about history and could remember facts and dates, no matter how remote, and always added interesting personal thoughts on the subject. He made history come alive because to him, it was. He loved maps, current non-fiction, jigsaw puzzles, and the family cat, Maggy. After retirement he took classes at NDSU in French as he loved reading it during his college years and thought it would be fun to have a go at it again. John played racquetball, handball, and tennis in his younger years and was a great walker. He would tell his family about the 10-mile walks he would take along the shoreline of Lake Michigan and then take a Chicago city bus back the 10 miles to his apartment. He was a man of great wit and kindness and thought the world of his family. John was preceded in death by his mother, Agnes Lindros; father, William Morris Guthrey; in-laws, Robert and Myrtle Beyer; newborn first grandchild, Dana and son, Mark. John is survived by his loving wife of 52 years; son, Matthew (Rapid City); daughter, Molly (West St. Paul); seven grandchildren, Eric, Ross, Tori, Calvin, Camilla, Marigold and Amanda; 2 great-grandchildren, Amara and Kal-el, and by special people in his life, Karen Julesberg (cousin) and Joan Levra. The family wishes to thank Sanford Home Health for their life-giving aid, the Hospice team we were blessed to have, the Sanford Dialysis Unit, and Rosewood Nursing Home for the loving care they gave John. We would also like to acknowledge the other special people in his life; Chad Mastrud, kind neighbors, Marilyn and Mike Worner, Alice Mastrud, and the Stoll family. A very special thank you goes to our children Matthew and Molly for their love and kindnesses in helping us these last two years. They put on many miles to be with us and they were a godsend. Matthew had been with John the 2 days before he died. A memorial service will be held at a later date in Wisconsin. Memorials may be sent to Hospice of the Red River Valley, Fargo, North Dakota.

John died Friday, June 14, 2019 at 11:30 p.m. under the care of Hospice of the Red River Valley at Rosewood Nursing Home with his wife Leslie and daughter Molly at his side. Born to Agnes (Oie) and William Morris Guthrey August 4, 1929 in Ardmore,... View Obituary & Service Information

The family of John Ole Guthrey created this Life Tributes page to make it easy to share your memories.

Send flowers to the Guthrey family.