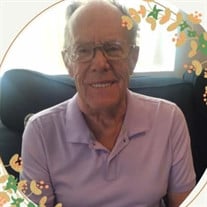 John Marvin Carlson was born in North Dakota on August 16, 1929 to John and Martha Carlson. He grew up on a farm in Horace, ND and attended school through the 10th grade. He joined the Army in 1951 and served for almost 2 years. John served in the Korean War and earned the Combat Infantry Badge, United Nations Service Medal, and the Korean Service Medal with one Bronze Service Star. He married Luella Kusler in 1954 and they had five children: three boys, Steve, Brad, and Timothy; two girls, Liza and Nancy. He worked as a television repairman for several years, then purchased and ran Carlson’s Launderette in Fargo, ND. John and Luella divorced in 1985. John married Becky Fitch in 1986 and later that year, along with Nancy, moved to Prescott Valley, AZ. John and Becky had one daughter, Natasha. They all moved to a home on Kings Hwy West in 1987. John and Becky divorced in 1992, but remained great friends throughout the years. John worked as a service repairman for several restaurants in northern Arizona. He retired from being a service technician about 30 years ago. John loved to fish, hunt and golf. He was a Minnesota Vikings fan and continued to root for them even after moving to Arizona. He was an innovator who created his own style of solar panels and sold several panels to friends and neighbors. He was the CEO, CFO, President, and Vice President of CSI (Carlson Solar Industries). He was an avid builder and made several improvements to his home. Even after retirement, he enjoyed doing upgrades and repairs, along with creating several different types of structures for his children's homes. He continued to live out his days at his home in Prescott Valley. He enjoyed the warm Arizona weather. One of his favorite pastimes was sitting on his porch, drink in hand, watching the cars go by on the highway. He was a caring son, kind husband, loving father, and wonderful friend. Sadly, John passed away on May 29, 2021 and will be met in heaven by his parents, John and Martha Carlson; infant sister, Dorothy Carlson; brothers, Victor and Gordon Carlson; sister-in-law, Norma Carlson; infant son, Timothy Carlson; daughter, Liza Carlson; and daughter-in-law Jamie Carlson. John is survived by his two sisters, Esther (Marlin) Kusler and Florence (Doug) Floodstrom; brother, Alvin (Charlotte) Carlson; two sons Steve (Jane) Carlson and Brad Carlson; two daughters Nancy (Doug) Ritchey and Natasha (Anthony) Reyes; four granddaughters, Alexis Carlson, Mandi (Brian) Moore, Willow Ritchey, and Adaline Reyes; grandson, Hunter Carlson; and great granddaughter Ann Smith. Service information: 5pm viewing with a 6pm service on June 29, 2021 at Amazing Grace Fellowship, 6933 Horizon Lane, Prescott Valley, AZ 86314 Information on viewing the service and video tribute online will be available at https://www.affordableburialandcremationllc.com/obituary/John-Carlson Interment: June 30, 2021, 11AM, Arizona Veteran’s Memorial Cemetery at Camp Navajo, Bellemont, AZ Since John loved to use wood for many projects, in lieu of flowers, please consider planting a tree in his name. There is a link available at: https://www.affordableburialandcremationllc.com/obituary/John-Carlson. Entrusted into the care of Affordable Burial and Cremation, LLC ([email protected])

John Marvin Carlson was born in North Dakota on August 16, 1929 to John and Martha Carlson. He grew up on a farm in Horace, ND and attended school through the 10th grade. He joined the Army in 1951 and served for almost 2 years. John served... View Obituary & Service Information

The family of John Marvin Carlson created this Life Tributes page to make it easy to share your memories.