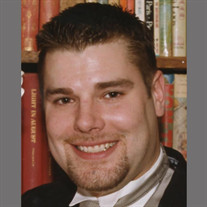 Brads tribute video can be viewed here. https://www.tributeslides.com/tributes/show/PG94XTTX3TDBFPZY John "Brad" Vining, 49, of Fargo, ND, passed away on Sunday, July 25, 2021 at his home in Fargo, ND. John Bradley Vining was born May 28, 1972 in North Bay, Ontario. After living in Canada, Germany and Virginia, he came to North Dakota in 1980. He attended West Fargo High School, graduating in 1991. His favorite sports were hockey and baseball. He attended NDSU. For a time he worked for early frontier rendevous with his uncle, Perry Vining. Brad then came back to Fargo where he became a manager at Herbergers Stores. In 1999 he married April Leinen. Between 2007 and 2018 he worked in the IT Department at Noridian. He suffered from chronic pancreatitis attacks and had severe insomnia. After a long hospitalization and recovery he started work at Family Fare in Fargo. His great loves in life were first his son, Reed, and then fishing and hunting. He also enjoyed woodworking and was a great handyman. Brad is survived by his son, Reed Leinen Vining; sister, Brittany Sprecher; and mother, Janet Vining. He was preceded in death by his father, John St. Clair Vining. Visitation: 5-7pm, Thursday, August 5, 2021 at Hanson-Runsvold Funeral Home, Fargo, ND. Condolences and memories may be shared at www.hansonrunsvold.com Arrangements by Hanson-Runsvold Funeral Home - Fargo, ND

The family of John "Brad" Bradley Vining created this Life Tributes page to make it easy to share your memories.

Send flowers to the Vining family.