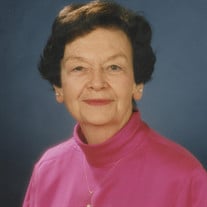 Jocelyn Birch Burdick, 97, of Fargo, passed away on December 26, 2019. She spent the holiday surrounded by family. Jocelyn was born in Fargo on February 6, 1922, to Albert and Magdalena Birch. She grew up in Fargo and graduated early from Central High School, having spent a part of her high school years at Hollywood High School in California. She went to Principia College, Elsah, Illinois, for two years, then transferred to Northwestern University, where she graduated from the School of Speech. Jocelyn returned to Fargo where she worked for Manny Marget as a DJ and announcer at KVOX radio. She married Kenneth Peterson in 1948. They had two children, Leslie and Birch. After Kenneth passed away, she married Quentin Burdick, whose wife had also passed away and with whom he had children Jan Mary, Jonathan, Jennifer and Jessica. Together Jocie and Quentin had son Gage. Jocelyn was involved in many community activities. She joined the Gamma Phi Beta sorority at Northwestern, was a devoted and involved sorority sister throughout her life and was nationally recognized for her philanthropy to the sorority. She was a longtime member of the Fine Arts Club, with special interest in the History and Drama sections. She was a member of the Christian Science Church, was a Sunday school teacher and served many years on its board. She was a longtime Campfire leader, charter member of the Fargo League of Women Voters, charter member of the FM Junior League, president of the PTA and president of her PEO chapter. Although Jocelyn had a chance to travel widely and lived part-time for a number of years in Washington, D.C., Fargo was always her home. She moved all of one block from where she was born. She spent her summers at the beloved family cottage on Lake Melissa and enjoyed golfing with the “beach bunch”. Jocelyn came from a long line of independent women who were involved in the issues of the day, including Matilda Joslyn Gage, who fought side-by-side with Susan B. Anthony and Elizabeth Cady Stanton for women’s suffrage, and who was raised in an Abolitionist home that was a station on the underground railroad. Jocelyn became acquainted with Quentin when they took opposite sides in a public debate about adding fluoride to city water. When Quentin passed away after serving 32 years in the U.S. Senate, she accepted Gov. Sinner’s appointment as interim U.S. Senator until a special election was held for Quentin’s seat. In so doing, she became the first woman U.S. Senator to represent North Dakota. Jocelyn was preceded in death by her parents, her husband Kenneth, her husband Quentin, her sister Antoinette (Bunny), stepson Jonathan and son Gage. She is survived by children Leslie Burdick, Washington, D.C.; and Birch (Jonelle) Burdick, Fargo; and her blended family including Jan Mary Hill, Deer River, MN; Jennifer Burdick, Fort Collins, CO; and Jessica Burdick, Anchorage, AK. Special thanks to the staff at Bethany on University, and Lanette Krinsky, for the care and compassion shown to Jocelyn. Memorials are preferred to the YWCA, Rape and Abuse Crisis Center, or to the organization of your choice. A memorial service is anticipated in the spring of 2020.

Jocelyn Birch Burdick, 97, of Fargo, passed away on December 26, 2019. She spent the holiday surrounded by family. Jocelyn was born in Fargo on February 6, 1922, to Albert and Magdalena Birch. She grew up in Fargo and graduated early from... View Obituary & Service Information

The family of Jocelyn Birch Burdick created this Life Tributes page to make it easy to share your memories.

Jocelyn Birch Burdick, 97, of Fargo, passed away on December...

Send flowers to the Burdick family.