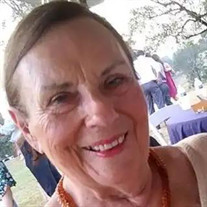 Joanne and Bill's service will be livestreamed here: https://vimeo.com/586849086 Mrs. Joanne Amelia Ohnstad (Brooks) of Fargo, ND died peacefully on Tuesday, March 17th, 2020 at age 85 from Influenza A complications. Joanne was on a family vacation to Anna Maria Island, FL when she took ill, and was surrounded by her family during the short illness. She received care and sacraments at Lakewood Ranch Medical Center. Joanne was born to parents Walter and Beatrice Brooks on November 5, 1934 in Heron Lake, MN. Growing up on a farm, she was the first of six children and attended Sherburn High School in Minnesota. In 1956, she married Alden O. Ohnstad, an Air Force jet pilot and engineer who passed away in 2013, after 56 years of marriage. Before marriage, Joanne was a dress saleswoman in Mankato, MN. During marriage she was a full-time homemaker and worked part-time performing alterations and Avon sales. After raising five children, she was one of the first women to earn a Nursing degree from NDSU. After 15 years, she retired as a respected RN from St. Luke’s / Meritcare Hospital and became a talented watercolor painter. While fleeing a White House tour she bore witness, along with her husband and son, to the 9-11-2001 Pentagon attack. Joanne leaves a legacy of five children, nine grandchildren and four great grandchildren; all educated, professional and successful. Joanne wanted others to know, “My greatest gift is my children.” Her surviving children are Amy E. Wichmann, Jane A. (Matt) Knudson, Suzanne L. (Bryan) Jackson, and ‘the one big baby’ turned out to be fraternal twins Doug J. (Kristi) Ohnstad & Eric W. Ohnstad. [Correction] Grandchildren are Isaac, Joanna, Lauren, Daniel, Calvin, Luke, Quinn, Kade (†), Kennedy, and Amelia. Great-grandchildren are David, Skye, Chambers, Brooks, Henry and Philip. Siblings are Tom (Jane) Brooks, Leo (Sharon) Brooks (†), Gale (Barb†) Brooks (†), Janice (Howard†) Sage, and Bonnie (Jim) Bothe. The family is grateful for the condolences, but declines flowers and donations. The family is thankful for Joanne’s Advance Care Directives & Living Will and encourages all to have one.

The family of Joanne A. Ohnstad created this Life Tributes page to make it easy to share your memories.