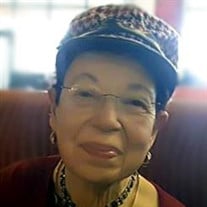 Joan's Memorial Service can be viewed here: https://vimeo.com/465439672 Joan Valden Teichmann departed on her final journey to eternal life on October 2, 2020. Joan was born May 2, 1937 in Grafton, ND to Marvin and Dorothy (Rockwell) Freschett. She grew up in Cavalier, ND and attended MacPhail School of Music in Minneapolis. She worked as a public school music teacher before her children were born, and then as a piano teacher. It was only due to a global pandemic that she stopped teaching piano lessons. Joan met Richard R. Teichmann when he made a pastoral visit to her whilst she was in hospital. They married on June 1, 1965. During their 32 years of marriage, they lived in Devils Lake, ND, Sioux Falls, SD and Fargo, ND, raising 3 children. They enjoyed spending summers at their lake cabin in MN. Joan loved music and was a beautiful piano player. She believed strongly in the power of music to heal, a belief that she put into practice after the unexpected death of Richard in January of 1997. In 2003, Joan began playing the piano for Recovery Worship services. She loved to provide the music for the services because she could perform the hymns “her way”: all jazzed up! Joan played for Recovery for 16 years, retiring in February of 2019. Joan also loved traveling and she often combined her two loves by attending music teacher conventions in the US and internationally. Richard often joined her on these trips. She was active in music education, judging festivals and piano guild competitions. Joan, with her fellow teachers, Marilyn Knutson and Mavis Wagner, started the Multi-Piano Festival in Fargo shortly after moving here in 1980. Although Joan had slowed down a bit in recent years, she still enjoyed traveling to Minneapolis to visit her friend, Dean Erickson. She also made a trip to the North Shore of Lake Superior every summer for a few days of relaxation. She was active in Music Club and her Red Hats group and she went to the gym several times a week until her health declined. Joan is survived by her children, John, Jennifer and Robert; her brother, Peter Freschette and her friend, Dean Erickson. She was preceded in death by her husband, Richard, and her parents. Masks are required at the service and we will practice social distancing. The service will be live-streamed at firstumcfargo.org.

The family of Joan Teichmann created this Life Tributes page to make it easy to share your memories.

Send flowers to the Teichmann family.