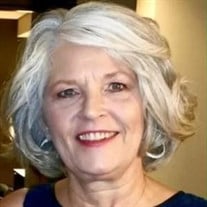 Joan’s service will be live-streamed here: https://boxcast.tv/view/funeral-for-joan-kjonaas-s1f7n0e9ijb3wk8ly93g Joan was born on June 2, 1953 in Mitchell, South Dakota to Edward and Connie Gillen. Joan grew up and graduated from White Lake, South Dakota in 1971. After high school, Joan attended college at Northern State University prior to moving to Fargo. Joan married Lonnie Kjonaas in May 1977 and they made their home in Fargo-Moorhead area, sadly Lonnie died in 2004; her family loved keeping Lonnie’s memory alive. Joan enjoyed working in the field of insurance for 40 years, she was employed at Bell Insurance at her time of death. She enjoyed working with her clients and building lasting friendships with her coworkers. Joan absolutely loved spending beautiful days and fun nights at the lake with her “Lake Family”, including Jim Brouse who held a special place in her heart. She made so many great friends and created lasting memories following her children in hockey and soccer. Joan cared deeply for her family and extended family members, she thought of others before herself. She will be remembered for her passion for life, great sense of humor, and for generously hosting friends and family. Joan passed away unexpectedly on Friday, January 15, 2021 at home. A visitation and prayer service will be held at Hanson-Runsvold Funeral home on Wednesday, January 20, 2021 starting at 6:00 pm. Joan’s funeral will be held at Hope Lutheran Church (North Campus) on January 21, 2021 at 11:00 am. Both services will be streamed for those that want to participate from afar. In lieu of flowers, the family asks that you consider making a donation to Hope Lutheran Church in Fargo, ND. She was preceded in death by her husband, Lonnie, father Edward, mother Connie, brother-in-law Rich Donahoe, nephew Eric Gillen, and mother-in-law Esther Lake. Joan is survived by her son, Nicholas (Rachel) Kjonaas and family, daughter Abby (Patrick) Joyce, two grandchildren Kate and Lauren Kjonaas. Three sisters, Gayle Donahoe, Omaha, NE; Kathy (Doug) Thorson, Millette, SD; Carla Gillen, Omaha, NE. Two brothers, Mark (Wanda) Gillen, White Lake, SD; Roche (Deb) Gillen, Kimball, SD; and several nieces and nephews. Joan's Tribute video can be viewed and copies ordered here: https://www.tributeslides.com/tributes/show/FZSTCZDGZ82QN3FY

Joan&#8217;s service will be live-streamed here: https://boxcast.tv/view/funeral-for-joan-kjonaas-s1f7n0e9ijb3wk8ly93g Joan was born on June 2, 1953 in Mitchell, South Dakota to Edward and Connie Gillen. Joan grew up and graduated from White... View Obituary & Service Information

The family of Joan Rose Kjonaas created this Life Tributes page to make it easy to share your memories.

Send flowers to the Kjonaas family.