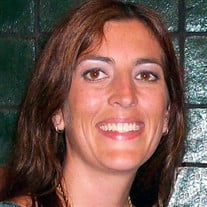 Jill Jacinda Younggren passed away on June 4, 2019, under the care of Hospice, at the family lake home, where she chose to be. A short, hard fought battle with cancer took her from us much too soon. Jill was born on September 26, 1973, in Fargo, ND, where she grew up. She attended Arizona State University, the University of Wyoming, and Montana State University in Missoula, majoring in computer science. She spent a college semester working at Disney World in Florida. Jill married Dick Inman on October 31, 2003. Both Jill and Dick worked at Timberline Ski Resort on Mt. Hood in Oregon for many years, where Jill served as Mountain Services Manager. Her duties were varied and interesting, including guest services, film shoot coordinator, disaster preparedness, and coordinator of the summer ski and snowboarding schools. She also indulged her love of baking by managing the High Mountain Bakery in Government Camp, OR. Locals would come in and buy all the bars she made before work or they would be sold out. Her homemade soups and sandwiches were also much requested. Jill and Dick moved to Dick’s home state of New Hampshire. While in New Hampshire, Jill worked at Ragged Mountain Ski Resort and wrote articles for a local paper. She came back in 2016 to spend her summer with her family and decided to stay. Jill’s favorite pastimes were skiing, snowboarding, riding her Harley, camping at a yurt in Idaho, and spending time at Pelican Lake. She was a free spirit who loved to travel. Jill was a wonderful aunt to her nieces and nephews. Jill is preceded in death by her and Dick’s stillborn child, Angel Baby Inman; Dick Inman; grandparents, Everet and Norma Younggren and Ellend and Grace Palmer; her uncles, John Younggren and Stephen Palmer; and her aunt Susan Younggren. Jill is survived by her parents, Bob and Pam Younggren; her sisters, Jennifer (Monte Hannestad) and Jacqy (Ryan George); her nephews, Jayden Younggren, Reese George, and Logan Hannestad; her nieces, Hope Younggren, Brooke George and Lainey George; her aunts, uncles and many cousins.

Jill Jacinda Younggren passed away on June 4, 2019, under the care of Hospice, at the family lake home, where she chose to be. A short, hard fought battle with cancer took her from us much too soon. Jill was born on September 26, 1973, in... View Obituary & Service Information

The family of Jill Jacinda Younggren created this Life Tributes page to make it easy to share your memories.

Send flowers to the Younggren family.