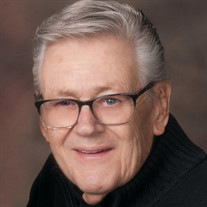 It is with great sadness that the family of Jerry Martin Pladson, 79, announces his passing on Sunday, July 7, 2019, at Eventide in Fargo, ND. Jerry was born to Martin and Clara (Larson) Pladson on December 3, 1939 in Fargo, ND. He attended Horace Mann Elementary, Ben Franklin Junior High and Central High Schools, graduating in 1958. He attended NDSU and then went on to various entrepreneurial endeavors, including selling insurance and operating a construction company, as well as owning Century 21 Dakota Realty, River City Realty, Inc., and Lab Properties, LLP. His early adventures in business included organizing backyard carnivals with prizes he persuaded local businesses into providing; purchasing soda pop wholesale from his uncle and selling it retail at Mickelson Field until the city built a concession stand putting him out of business; selling Aristocrat (square) pots and pans (“How can you get a square meal from a round pan?”) and Cutco cutlery. His early entrepreneurial successes led him into selling insurance, where he won a trip to Europe. He then settled into a life of real estate. Jerry married “the love of my life” Jean Marie Hansvick on October 1, 1976 and was father to Jennifer, James and Joanna. He was a Mason and a Shriner with the Mobil Nobles. He was also an Elder and an active member of 1st Presbyterian Church of Fargo, ND. He enjoyed a lifetime of summers on Lake Melissa. He also loved dogs; they were “people” to him. Jerry’s kindness and generosity were well known and will be greatly missed. He loved to give $50 bills to people he thought looked like they could use a break (he had five new $50 bills in wallet before he passed). He sought opportunities to give compliments to brighten people’s day. His last project was compiling a book of inspirational quotes, “Words to Live By, Words to Laugh By, and Blessings to Live By”. Future goals included finding ways to increase donations to food pantries in the Fargo-Moorhead area and to write a children’s book about the importance of safety around strangers. Jerry was immensely proud of his family. He loved his wife, children, and grandchildren so much. He was always looking for ways to ensure their happiness and safety. Jerry would frequently show up randomly with his favorite CDs, giving them to his family and encouraging his loved ones to listen to the music and to sing out loud. “Music is so good for the soul!”. Anything that Jerry found helpful in his life he wanted to share with others. He was infectious like that; he wanted others to feel and share in any goodness that he experienced. Jerry is survived by wife, Jean; daughter, Jennifer (Ryan) Johnston of Fargo; son, James (Jessica) Pladson of Fargo; daughter, Joanna (Steven) Barber of St. Augustine, FL; grandchildren, Ethan and Leif Johnston; Meredith, Lila, Camille, and Brooklyn Pladson; and Della and Bodhi Barber; sister, Maxine “Maggie” Lauer; nephew, Steve Green; niece, Jackie (Stephen Anderson) Green; nephew, Randy (Wendi) Lauer; niece, Kathy (Gerry) Van Treeck; brother-in-law, John (Joy) Hansvick; niece, Penny (Craig) Swanson; and many great nieces and nephews. He was preceded in death by his parents; sister, Delores Green; brother-in-law, Louis Green; brother, Verne Pladson; sister-in-law, Donna Pladson; brother-in-law, Charles Lauer; and, niece Sharon Green. Memorials preferred to The Emergency Food Pantry in Fargo or to the family who, as requested by Jerry, will continue to print and distribute “Words to Live By, Words to Laugh By, and Blessings to Live By”.

It is with great sadness that the family of Jerry Martin Pladson, 79, announces his passing on Sunday, July 7, 2019, at Eventide in Fargo, ND. Jerry was born to Martin and Clara (Larson) Pladson on December 3, 1939 in Fargo, ND. He attended... View Obituary & Service Information

The family of Jerry Martin Pladson created this Life Tributes page to make it easy to share your memories.

It is with great sadness that the family of Jerry Martin Pladson,...

Send flowers to the Pladson family.