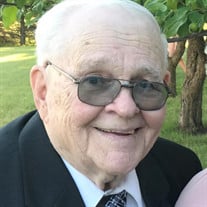 Celebrating the Life of Jerral C. Jones, Sr. Jerral Claud Jones, Sr. entered this world on October 10th, 1928, and departed it to meet his Lord and Savior on May 4th, 2020, just four days after his beloved wife of 69 years, Marilyn, departed for Heaven. He did not fear death, but looked forward to it with “great anticipation” to quote Billy Graham, one of Jerral’s most admired ministers of the gospel. Jerral, known to family as “J.C.” and his friends as “Jerry”, was born in Mount Sterling, Kentucky to Floyd and Mildred Jones. He was raised there working alongside his Dad in various building-related trades until graduating from high school. Raised in a strong Christian family, he felt a calling on his life early-on and left shortly after graduation for bible college. It was at North Central Bible College in Minneapolis that he met the love of his life, Marilyn Baker, and shortly after graduation they were married on June 22, 1951. He was licensed as a minister by the Assemblies of God denomination and they embarked on a life of ministry together immediately thereafter. They pastored churches in Glencoe, Sleepy Eye and Pine City, Minnesota before relocating to Fargo, North Dakota in 1960. In Fargo Jerral worked for several companies in a sales capacity, starting with Fargo Linoleum, KUTT (became KQWB) radio, Fargo Rubber Stamp, Richtman’s Printing, then wrapping up his sales career with FTC Building Materials. Throughout his secular career, he continued to be active in ministry, serving in many capacities within his local church as well as filling the pulpit for many other churches throughout the upper midwest when they were between pastors or covering for pastors on vacation. He loved to preach the Gospel of Jesus Christ, and was always ready, willing and able to share the gospel message with anyone on a moment’s notice. Jerral had a passion for motor vehicles and enjoyed tinkering with them and restoring them. He was active in the Red River Valley Horseless Carriage Club, a local vintage car club. Over the years he owned a 1933 Pontiac, 1936 Chevy, and his ultimate pride and joy, a 1937 Willys which now resides in a car museum in Cleveland, Ohio. He loved to travel with his family. Long trips by car were the norm while growing up in the Jones household, with biennial trips to Kentucky to see extended family, and trips all over the country in the other years. Campers were added to the vehicle collection later, starting with a Skamper pop-up camper, then a Pathfinder travel trailer, then several motor homes. They loved taking their camper to various bible camps in the summer to share their joy of camping with others who shared their strong faith in Christ. In retirement he and Marilyn continued to travel, visiting all fifty states plus Norway. When not traveling, their days were filled with time spent with their numerous dear friends and beloved family. Jerral is survived by his three boys, Jerry Jones, Jr. (Jean), Kendall Jones, and Loren Jones (Gail); their five grandchildren Kari Verhulst (Barney), Tami Soyring (Eric), Joshua Jones, Tessie Schwanke (Tyler) and Ariston Jones (Sarah); four great grandchildren, Savannah Erb (Stephen), Gabe Soyring, Isabella Verhulst, and Jace Verhulst; and two great great grandchildren, Kingston Erb and Presley Erb. He is also survived by his brother, Harold Jones, and sisters Joy McIlvain and Bernice McKinney. A visitation for Jerral and Marilyn will be held from 4pm-6pm on Sunday, May 10, 2020 at Hanson-Runsvold Funeral Home, Fargo, ND. The funeral service for Jerral and Marilyn will be streamed here at 11am, Monday, May 11, 2020.

Celebrating the Life of Jerral C. Jones, Sr. Jerral Claud Jones, Sr. entered this world on October 10th, 1928, and departed it to meet his Lord and Savior on May 4th, 2020, just four days after his beloved wife of 69 years, Marilyn, departed... View Obituary & Service Information

The family of Jerral Claud Jones Sr. created this Life Tributes page to make it easy to share your memories.