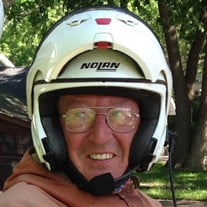 Prayer Service will be streamed here at 7pm, Sunday, June 28, 2020: https://vimeo.com/433114011 Memorial Service will be streamed here at 2pm, Monday, June 29, 2020: https://vimeo.com/433114207 Jeffrey Scott Rye, 61, of Fargo, died Wednesday, June 24, 2020, at Sanford Hospice House in Fargo, North Dakota. He was born on October 27, 1958, in Owatonna, Minnesota, the son of O.W. "Bill" and Florence (Ahlers) Rye. Jeff graduated from Owatonna High School in 1977. He attended Concordia College in Moorhead, Minnesota, earning a degree in Business Administration and Accounting, graduating in 1981. In Kansas, he worked for the American Companies of Topeka until 2000 when he began working for Northstar Aviation Insurance of Fargo, North Dakota. He was united in marriage to Shannon Gunderson on March 31, 1984, in Minneapolis, Minnesota. During his life, he had earned his private pilot's license, which afforded Jeff and Shannon many flights to camping vacations. Their motorcycle adventures took them to every state west of the Mississippi and to a number of states in the southeast, culminating to nearly half a million miles. He is survived by his wife Shannon, his brother Paul (Linda) Rye of Urbandale, Iowa; sisters Brenda Rye of Burnsville, Minnesota; and Sarah (Jim) Berggren of Durango, Colorado; along with five nieces and nephews and ten great-nieces and nephews. He was preceded in death by his parents. Visitation will be held at Hanson-Runsvold Funeral Home on Sunday, June 28, 2020, from 5:00 P.M to 7:00 P.M with a Prayer Service beginning at 7:00. Memorial Service will be held Monday, June 29, 2020, at 2:00 P.M at Hanson-Runsvold Funeral Home with Pastor Stephanie Tollefson officiating. Both services will be streamed on the Hanson-Runsvold website. Burial will be at Riverside Cemetery in Fargo. Memorials are preferred to go towards the Roger Maris Cancer Center, First Lutheran Church in Fargo, North Dakota, or the donor's choice.

The family of Jeffrey Scott Rye created this Life Tributes page to make it easy to share your memories.

Prayer Service will be streamed here at 7pm, Sunday, June 28,...

Send flowers to the Rye family.