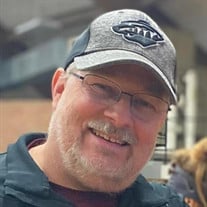 View Jeffrey McKay's Service Livestream Here: https://youtu.be/Dc9yKy5018c View Jeffrey McKay's Tribute Video Here: https://www.tributeslides.com/tributes/show/9KSWBSTXGB2B7XXP Jeffrey Hugh McKay (Jeff), 53, of Fargo, ND, passed away surrounded by his family after a brief illness in Sanford Health Broadway on December 30, 2021. Jeff was born on January 22, 1968, in Grand Forks, ND, to G. James (Jim) and JoAnn McKay of Gilby, ND. He and his sister, Julie, spent the first 15 years of his life in Gilby, where he was involved in Boy Scouts, football, baseball, and track. He loved the outdoors, hunting, and fishing, especially with his friends and family. In 1983, the family moved to Grand Forks, ND, where he continued his sports, and he was much closer to his beloved UND. He graduated from Red River High School in 1986 and the University of North Dakota in 1991 with a degree in Business and Financial Management. In 1992, Jeff moved to Fargo, ND, to continue his work in property management. He enjoyed playing softball, golf, and volleyball and heading to the lake with lots of friends. In 1996, he was introduced to Michelle McLeod, who became his wife in 1998. They added to their family in 1999 with the birth of daughter Jessica and in 2002 welcomed twin son and daughter, Ian and Emily. Jeff was a very active dad! His greatest joys involved doing anything with or for his kids, whether it was attending every possible event they were involved in (which were endless), cooking/grilling family dinners, helping his kids avoid the 3:15 club after school, attending UND hockey games, spending weekends at the lake on the pontoon, helping facilitate basketball tournaments and the trapshooting team. He was very active in volunteering with the Emergency Food Pantry and Kiwanis Club. Jeff loved UND and had a passion for mentoring student-athletes by providing them with scholarships. He made a point to attend at least one of their events each season, so they knew he was there to support them in their careers at UND. Jeff was a steadfast and true friend. Most people who met him left with a smile, a joke, or a funny story. Bubba, as many knew him, was the ultimate goofball! Jeff is survived by his wife Michelle; three children, Jessica, Ian, Emily; his constant furry companion Cleo; sister Julie (Wayne) Ganskop, Rochester, MN; and nieces Kailey (Mike) Ganskop Steinman, Brooklyn Park, MN; and Hannah Ganskop, Hudson, FL along with his mother-in-law, Carrie McLeod, Fargo, ND; sister-in-law Carlee McLeod, Bismarck, ND. He was preceded in death by his parents.

The family of Jeffrey McKay created this Life Tributes page to make it easy to share your memories.

Send flowers to the McKay family.