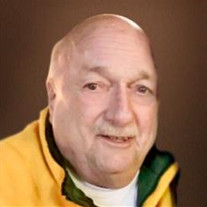 Jeff's service will be livestreamed here: https://vimeo.com/503506852 Jeff's Tribute Video can be viewed here: https://www.tributeslides.com/tributes/show/NDB5MTFXHK9BK6QJ Jeffrey Eugene Rogerson, 72, Fargo, ND passed away on January 17, 2021. Jeff Rogerson was born on April 7, 1948 to Peggy (Howk) and Don Rogerson in Ogden, Utah. He was raised in Ogden with his two sisters and graduated from Roy High in 1966. Jeff enlisted in the Navy in 1967 and was eventually stationed in Honolulu preparing the USS NOXUBEE, a gas tanker running on the Qua Viet River during the Vietnam War. After the Navy he married Barbara Brady in 1972. This marriage produced three children Traci, Abe, and Nick. They moved to North Dakota in 1978 for a job opportunity for Jeff. Jeff enjoyed taking his kids on trips in the 70’s & 80’s. Jeff and Barbara later divorced. Jeff met Brenda Rogerson-Schumacher and they were married in 1988. They moved to Fargo in 1988 and had their daughter Jayne in 1991. Jeff spent his whole professional career in the furniture/appliance sales industry and was fortunate to find a home working for a family-owned business, Northern Plains Distributing from 1985-2013. Jeff spent many years of his career here and was a huge contributor to the success of the company. During his time at Northern Plains, he established lifelong personal and professional relationships with his colleagues and customers. Other than his wife and kids a big part of Jeff’s life was his job and his work ethic was profound. In addition to being one of the best salesmen known to date, he was also known as “Chef Jeff” and “The Grill Master.” When Jeff was not working, with his family, or cooking you could find him at the nearest golf course. He had a huge passion for the sport and spent a lot of time perfecting his game. During the 90’s and early 2000’s Jeff, Brenda, and Jayne traveled and vacationed frequently. Jeff really enjoyed the beach. After he retired in 2013, he spent the remainder of his life with his daughter Jayne and his grandsons Cash and Kingston by his side. Throughout the past 6 years he experienced different health issues and Jayne stepped in to take care of him starting in 2014. He was proud of Jayne and who she grew up to become as a mother, professional, and wife. He was also immensely proud of his grandsons and would brag about them to others often. Jeff was a warm, welcoming, charismatic, respectful, and funny man. People gravitated towards him and his witty charm won over the hearts of anyone he encountered. He will be remembered and missed by many. Jeff is survived by his children Traci Root, Marble, MN, Abraham (Marcia) Rogerson, Bismarck, ND, Nicholas Rogerson, Seattle, WA, and Jayne (Alex) Martinez, Fargo, ND; grandchildren: Bret, Jordan, Annastasia, Cameron, Cash, Kingston, and future baby Martinez; great-grandson, D.J.; sister, Kristi (Scott) Edwards, Ogden, UT; his former spouse, Brenda Rogerson, Fargo, N.D., and many other extended family members. He is preceded in death by his parents, Peggy Howk-Geffen and Don Rogerson, stepfather, Jerome Geffen, sister, Karen Heninger and former spouse, Barbara Brady. Thank you to the Rosewood on Broadway and Sanford staff for their continued care over the past couple years. A visitation will be held from 4-6pm, Tuesday, January 26 at Hanson-Runsvold Funeral Home. A private service will be held and live-streamed on the funeral home's website at 11am, Wednesday, January 27. Memories and condolences may be shared at www.hansonrunsvold.com Arrangements by Hanson-Runsvold Funeral Home - Fargo, ND.

The family of Jeffrey "Jeff" Eugene Rogerson created this Life Tributes page to make it easy to share your memories.

Send flowers to the Rogerson family.