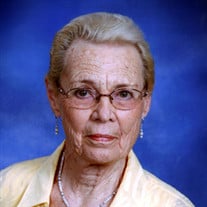 Jeannette Peterson, 92, of Fargo, ND, died Sunday, April 14, 2019 at Eventide Fargo. Jeannette E. Peterson was born to John and Elizabeth (Wiegand) Koch on May 19, 1926 near Gatesville, Texas. She received her early childhood and high school education in that area. In 1944, she enlisted in the Cadet Nurses Corps. She took her training at Hillcrest Baptist Hospital in Waco, Texas, with affiliated studies at Baylor University in Waco, and at Bradford Childrens Hospital in Dallas. She graduated in February 1947 as an RN. On September 28, 1946, Jeannette married Joseph Peterson of Montevideo, MN. They lived in that area until 1965, when Joe was transferred to Fargo, ND with Northern States Power Company, and have lived in Fargo since that time. Jeannette worked as an RN in Montevideo and Fargo hospitals and clinics and was with Blue Cross Blue Shield for several years. She enjoyed her work as a nurse and made many friends in the community. Jeannette loved her family; Joe and the children, Joel, Elizabeth, Karl and Susan, and was involved in their activities. In later years, she was delighted to have grandchildren and great-grandchildren. Jeannette was very active in Olivet Lutheran Church, and served in different capacities there. She particularly enjoyed her quilting and circle groups. She also enjoyed growing hybrid tea roses in her flower garden. For many summers, she distributed beautiful bouquets to friends, neighbors and to the church. In retirement, Jeannette and Joe continued to live in Fargo, but had more time to travel and spend time with their children and grandchildren. They enjoyed wintering in Florida and Texas for a number of years, and took many long road trips. Jeannette is survived by her husband of 72 years, Joe; two sons, Joel (Connie) Peterson, Fargo, ND and Karl (Maria) Peterson, Salt Lake City, UT; two daughters, Elizabeth Howard, Tampa, FL and Susan (Michael) Koesterman, Moorhead, MN; eight grandchildren and seven great-grandchildren. She was preceded in death by her parents, five sisters and six brothers. MEMORIAL SERVICE: 1pm, Thursday, April 18, 2019 at Olivet Lutheran Church, Fargo, ND VISITATION: 5-7pm, Wednesday, April 17, 2019 at Hanson-Runsvold Funeral Home, Fargo, ND PRAYER SERVICE: 7pm, Wednesday at the funeral home BURIAL: Riverside Cemetery, Fargo, ND In lieu of flowers, memorials are preferred to Churches United for the Homeless or Olivet Lutheran Church. Condolences and memories may be shared at www.hansonrunsvold.com Arrangements by Hanson-Runsvold Funeral Home - Fargo, ND

The family of Jeannette Elizabeth Peterson created this Life Tributes page to make it easy to share your memories.