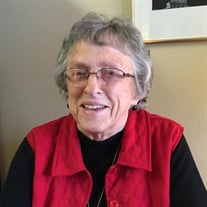 View Jeanette Stone's Memorial Service Livestream here: https://vimeo.com/707298578 Jeanette Loraine Stone, 93, of Fargo, North Dakota, passed away peacefully in her sleep at St. Francis Nursing Home in Breckenridge, MN, on Friday, April 29, 2022. Jeanette was born on January 19, 1929 on a farm near Barney, ND to Robert and Helen Stone. She attended Antelope Consolidated School and graduated from Wyndmere High School in 1946. She attended Science School in Wahpeton for one year and later earned a B.S. degree from Valley City State University in 1954 and then an M.S. degree from Moorhead State University in 1958. Jeanette taught school in Finley, ND, from 1948 to 1950, and Clara Barton School in Fargo, ND, from 1950 to 1954. She became the principal at Washington Elementary School in Fargo, ND, in 1954 and remained there until 1970. From 1970 to 1979, Jeanette was a principal at Longfellow School and later became principal at Carl Ben Eielson School until her retirement in 1985. Jeanette worked with several organizations and was very active in the First United Methodist Church in Fargo, North Dakota. She was the first woman president to serve on several national committees. She was at one point the president of the NAESP, the Cass County Retired Teachers Association, and the Fargo Soroptimist Club. She was the vice president of the Delta Kappa Gamma Education Fraternity and the secretary of the Beta Chapter. Jeanette is survived by her brother Dale (Judy) Stone, of Valparaiso, Indiana, her sister Carol (Ray) Rauen, of Stewartville, Minnesota, her sister-in-law, Beverly Stone and Donna Stone along with many nieces, nephews, and great and great-great nieces and nephews. She is preceded in death by her parents, Robert and Helen Stone, two brothers, Duane and James Stone, one nephew, Brian Stone, and her dear friend Rose Gudmundson.

The family of Jeanette Loraine Stone created this Life Tributes page to make it easy to share your memories.

Send flowers to the Stone family.