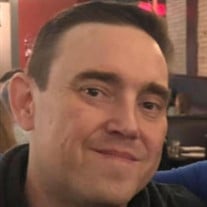 Jason's Prayer Service will be live streamed here at 7pm, Tuesday, March 23, 2021: https://vimeo.com/525158981 Jason's tribute video can be viewed here https://www.tributeslides.com/tributes/show/5G9487TZTGN229RT Jason "Teddy" Ramstad passed away quietly at home on Monday, March 15, 2021. He was 48 years old. Jason was born February 12th, 1973 in Fargo, North Dakota to Duane "Dewey" and Janet (Doyle) Ramstad. He spent his early years in Audubon, MN until the family moved to Detroit Lakes, MN. He graduated from Detroit Lakes High School in 1991, where he participated in basketball and baseball. He spent his summers playing Legion Baseball, a sport that became a true love of his and led to many wonderful experiences and friendships along the way. Some of his most treasured moments were during the summer and at the lake with friends, which included waterskiing, golfing, fishing, and doing other things "responsible teenagers" would spend their time doing such as going to WE Fest. After high school, Jason attended Minnesota State University-Moorhead, where he majored in Business and Corporate Communications. During his lengthy stay at MSUM, he was heavily involved with the Phi Sigma Delta fraternity and joined another band of brothers that brought him countless memories and experiences. When he wasn't being a "responsible college student" who finished on the Dean's List, he enjoyed spending time travelling with his friends on spring break/skiing trips and other adventures that included sporting events, concerts and the Indy 500. He graduated in 1997 and continued to stay an active alumnus and supporter of his college and fraternity. The place where Jason called home more than anywhere was Chubs Pub, where he worked as manager for 23 years. He was formerly on the Board of Directors for the ND Hospitality Association, advocating on various industry related issues on both the state and local levels. He cherished the fact that he was able to work side by side with his mother, father, uncle, and grandfather on a daily basis. When Jason stepped into the doors of Chubs, he no longer was Jason and became Teddy to the vast majority of people he encountered. He welcomed everyone that walked in the door with a warm greeting, smile, witty remark, or a teddy bear hug that became legendary to many of the people who knew him. He had an uncanny ability to remember the names and drinks of people who he hadn't even seen in years. The multitude of customers that worked through the doors provided countless memories, brought out his charismatic personality and became friends for life. Those friends were the light and support that fueled him through the best and worst of times, which he sought to repay through selfless acts of kindness and support wherever possible. One of the greatest joys to Jason was spending time with family, especially for holidays, birthdays and traditional Sunday dinners. He enjoyed watching sporting events that included his beloved Minnesota Golden Gophers, San Francisco 49ers, Minnesota Twins and of course NDSU Bison. There was no place where he was more at peace than at a baseball field watching a game. His steel trap memory created epic conversations with friends that were fueled solely by movie quotes or trivial knowledge. His smile was infectious. His generosity, wit and laugh could fill a stadium. His charm and charisma could take control of a crowded room and bring people together in joyous unison like no other. For that he will be missed by many. Jason is survived by his mother, Janet; brother, Brett; uncle, Mark Doyle; cousin, Erin (Matt) Welle; niece, Avery Ramstad; nephew, Kellan Ramstad; and cousins Declan, Camden and Kye Welle. He was preceded in death by his father, Duane; grandparents, Bill and Doris Doyle; grandparents, Julius and Myrtle Ramstad; and his aunt Katie Doyle. VISITATION will be Tuesday, March 23rd from 5-7pm with a PRAYER SERVICE at 7:00pm at Hanson-Runsvold Funeral Home located at 215 7th Street South, Fargo. INTERMENT will be Wednesday, March 24th at 3pm at Riverside Cemetery located 2102 5th Street South, Fargo. All are welcome. A celebration of life will be scheduled at a later date. In lieu of flowers, the family requests a memorial consideration in Jason's name to his favorite charitable organization, the Make-A-Wish foundation.

The family of Jason "Teddy" Alan Ramstad created this Life Tributes page to make it easy to share your memories.

Send flowers to the Ramstad family.