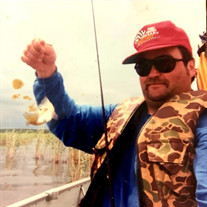 Jason A. Gould, 60, Fargo, died Thursday June 18, 2020 in his home in Fargo. Jason Allan Gould was born Sept.18, 1959 in Fargo, ND to Roger and Joyce (Olson) Gould and was baptized at St. Mark’s Lutheran Church, Fargo, on Oct. 18, 1959. He grew up and attended school in Fargo and West Fargo. He attended Job Corps in South Dakota and later worked as a welder in Fargo. Survivors include a sister, Michelle (Everett) Walker, Valley City, ND; a brother, the Rev. Jamie Parsley, Fargo; his father, Roger Gould, Fargo; his friend, Darlene Erovik, Fargo; five nieces and nephews; and several uncles, aunts and cousins. He was preceded in death by his mother, Joyce Parsley, his step-father, Al Parsley, and his brother, Jeff Gould. Private services will be held at a later time. Burial will be at Maple Sheyenne Cemetery, near Harwood, ND.

The family of Jason Allan Gould created this Life Tributes page to make it easy to share your memories.

Send flowers to the Gould family.